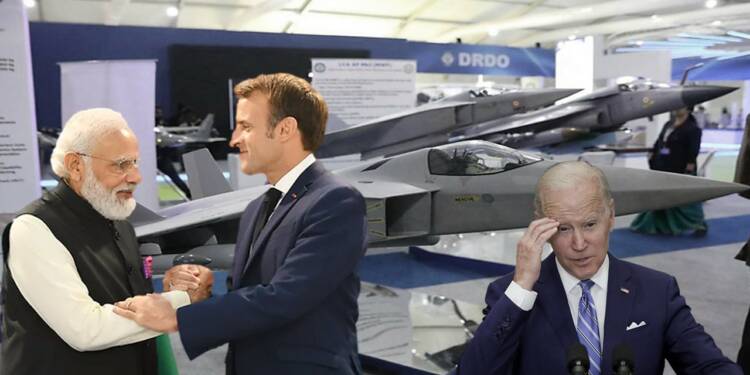 The Indian Government this month is poised to review one of India’s most strategically important projects i.e. development of a 120-kN engine to power the country’s futuristic 6.5-generation Advanced Medium Combat Aircraft (AMCA).

India and France back in 2016 signed a €7.8 billion Rafale deal. In this deal, France committed to invest 50 percent, or €3.9 billion. It was anticipated that the AMCA engines would be generated through this deal as France will transfer the technology to India.

The deal between India and France is stuck in hurdles as negotiations are being carried out, and this is becoming a major concern for India as its most ambitious project has still not taken a shape yet. However, this hasn’t affected the relationship between India and France, as both are confident of a possible breakthrough very soon.

However, someone at the backstage is not ready for this deal to happen. That person is none other than, the POTUS Joe Biden.

US jumps for AMCA

The US has reoffered India to develop the 110-kilonewton (kn) engine for India’s Advanced Medium Combat Aircraft (AMCA). A similar offer was given by the US back in 2019. The offer was to jointly develop the fighter engine.

Modi however shelved the proposal after disagreements over technology sharing between the two countries. The former President Donald Trump’s administration was reluctant to share “core or hot engine technology” with India.

This time, the US is ready to share its technology for the 110 kn engine required by India. Surprisingly, the development of an “Enhanced Performance Engine,” or “EPE,” variation of the GE-F414 for the US Navy also occurs at the same time when the USA presents it’s irk to develop AMCA engines again.

Now, this new offer for the AMCA’s aircraft engine is being proposed to India by General Electric, on similar lines to offers by French and British engine makers Safran and Rolls Royce. Through this proposal, the US has tried challenging France.

Here’s a quick question, why is that all of a sudden, the US again is desperate to build an engine for India? The answer could be France’s growing influence in the arms exports industry.

At the end of the last decade, France emerged as a major player in the Arms export industry. Between 2017-2021, the US acquired 39%; Russia accounted for 19%; whereas, France acquired 11% of the market.

Yet, it is a matter of concern for the USA that the exports of France captured a chunk of the market through a boom. France increased its exports of arms in the 2017-2021 period and became the third biggest exporter of weaponry in the world.

Between 2015-2021, the growth of exports was exponential as there was a 92% increase in exports. If the current trend persists, France may take another large chunk of the market, and this would be a major blow to US’ top military complex leaders.

In 2021, the Aukus pact cost France a submarine contract worth billions of dollars as the deal between Australia and France was abolished purposely by the USA, due to which, Australia had to pay, $585 M to France.

Similarly, Norway announced the abolishment of the NH90 helicopter contract after 20 years. Norway was importing NH90 helicopters from a France-based manufacturer and was bound by an agreement. Surprisingly, the US had established a deal with Norway just before the NH90 deal was abolished.

With India, Russia remains its largest supplier, while the US, France, and the UK remain key suppliers. Latest deal of India with France such as the Rafale, make it more obvious why Biden wants to cut France’s relations with India.

Read More: France and India are resetting the rules of Indo-Pacific and showing China the exit door

In addition, Narendra Modi knows that relying too much on the USA for an ambitious project wouldn’t be a good step. It is highly unlikely that India would be accepting US’ offer because Modi knows this is the senile Biden’s new trick to benefit his military complex by tarnishing the rise of France.