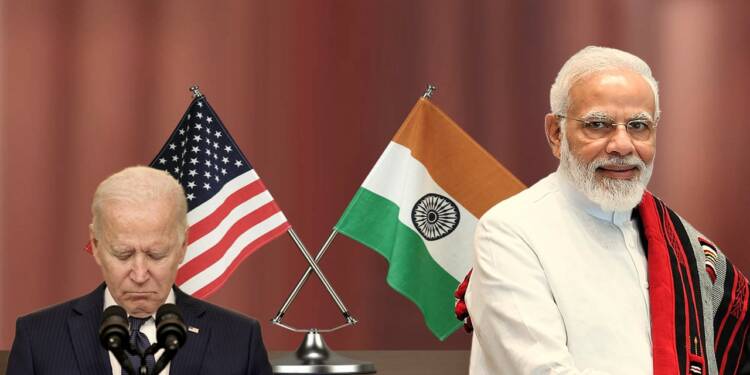 When it comes to the Indo-Pacific region, Biden has clearly been hatching a plot against India. He has always shown ignorance on considering the importance of India in the region. And now when Biden proposed to launch the Indo-Pacific Economic Framework (IPEF) during his bilateral meeting with Japan as well as for the summit of the QUAD, India refrained from committing itself to joining it.

After Trump’s withdrawal from the TPP, IPEF is considered as a critical foundation for restoring US credibility in the region. The fundamental goal of IPEF is to counter China’s rise in the region. But when it comes to the Indo-Pacific area, Biden’s biggest mistake is that he has been dismissing India’s relevance.

Biden using Kishida as a pawn in the Indo-Pacific region

Biden is clearly infuriated with India’s soft stance towards Russia amidst the Russia-Ukraine conflict.  He is therefore using all the possible means to restrict India’s authority in the region.

For instance, when Japanese Prime Minister Fumio Kishida held talks with NATO Secretary-General Jens Stoltenberg, two anomalies happened. First, the NATO Secretary-General did not mention India. What that means is that NATO is looking to expand its influence in the Indo-Pacific without India. NATO wants to undercut India’s influence in the region, and project it as a player which does not matter. So, while every QUAD country figures prominently in NATO’s Indo-Pacific plans, India finds no name on the list.

And second, Stolenberg during the meeting referred to Indo-Pacific as the “Asia-Pacific”.  This reiterates the notion that Biden wants to undermine India’s role in the region.  And PM Kishida is unfortunately facilitating Biden in the accomplishment of this task.

A weak Kishida fails to see that the focus should be on building QUAD under Indian leadership in order to counter Chinese expansionism in the region. Furthermore, Kishida must also recognise that NATO is fundamentally anti-Russian. It has nothing to do with the response of the area to China. QUAD, on the other hand, provides a forum for members to debate regional issues and impose coordinated pressure on China.

Read more: NATO attempts to undermine India and Quad in the Indo-Pacific

Also, as the US, UK, and Australia expand their trilateral alliance (AUKUS) on a range of modern military capabilities, they expected to include Japan, but the US-led bloc failed to recognise that India is now the region’s dominant power.

In fact, the key world powers such as France believe that China cannot be dealt with in the region without India. France also opposes NATO’s presence in the Indo-Pacific.

Read more: Not QUAD but NATO: Biden’s carrot to South Korea is devastating for both groups

Nevertheless, India’s non-commitment to the IPEF is a tight slap on the US’s face. It showed its reluctance to join the framework when invited.

This is an initiative by the United States. We have received the details of it and we are examining it,” Arindam Bagchi, the spokesperson of the MEA, told journalist.

In any case, the US has been working to downplay India’s influence in the area for some time, under the leadership of Joe Biden. But all we can say is that Biden’s failed Indo-Pacific plan is displaying yet another bumbling and juvenile act.