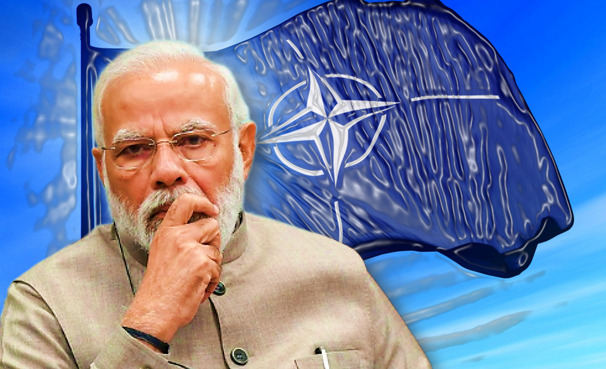 NATO is a shady organization. First, it expanded eastward in Europe – breaking all promises made to the former Soviet Union that it will never do so, and now, it is looking to make an entry into the Indo Pacific. Mind you, NATO would have been welcomed with wide arms to the region had it not been playing its dirty games against select countries. However, at the behest of the Biden administration, NATO is looking to undercut the influence of India in this crucial region. New Delhi will not tolerate this.

Recently, after the G7 summit in Brussels, Japanese Prime Minister Fumio Kishida held talks with NATO Secretary-General Jens Stoltenberg. Stoltenberg said the bloc would work more closely with “Asia-Pacific partners”, which include “Japan as well as South Korea and Australia.”

There were two very stark anomalies. First, the NATO Secretary-General did not mention India. What that means is that NATO is looking to expand its influence in the Indo-Pacific without India. NATO wants to undercut India’s influence in the region, and project it as a player which does not matter. So, while every QUAD country figures prominently in NATO’s Indo-Pacific plans, India finds no name on the list.

Secondly, the NATO chief referred to the Indo-Pacific as the “Asia Pacific”. This is the terminology that China uses for the region. So it gives a clear picture of the catering deeds that Nato is currently into. How will NATO counter China when it cannot even muster the courage to use the right terminology?

But wait, using the term “Asia Pacific” cuts out India from the picture even further! So, just because India refuses to toe the line of the Biden administration and NATO on several issues, the bloc has decided to alienate New Delhi.

But any strategy to counter China in the Indo Pacific will fail unless India is onboard with it.  France, which is by far the most proactive European power in the Indo Pacific considers India a brother in arms. The two have strong defense ties, and that is what China fears.

India also has strong bilateral and strategic ties with Japan, Australia, and South Korea. So, if the NATO chief thinks he can swoop in and steal New Delhi’s thunder in the Indo Pacific, he is in for a rude shock.

Here’s an interesting fact. The NATO chief is not side-lining India on his own accord. His strings are actually being pulled by an old man from within the White House. Quad was supposed to be a military alliance against China. Yet, on the security front, it has not made much progress ever since Biden took charge of the United States. The Quad has limited its focus to the economic front.

Read more: The irrelevance of NATO is now out in the open

But that was done strategically. Biden always wanted to involve NATO in the Indo-Pacific, minus India in order to deal militarily with China. The Biden administration does not want to work with India to counter China. India is rather ruthless when it comes to engaging with China. For somebody who is scared of Xi Jinping, that factor did not really play well with Biden.

Every Quad country except India is being pulled into NATO’s security net in the Indo Pacific. Biden is trying to replace Quad with NATO. What Biden does not know is that Japan, Australia, and even South Korea will refuse to work against China unless India is back on board.

The United Shame of America: US sneakily ramps up import of Russian oil after sanctioning it