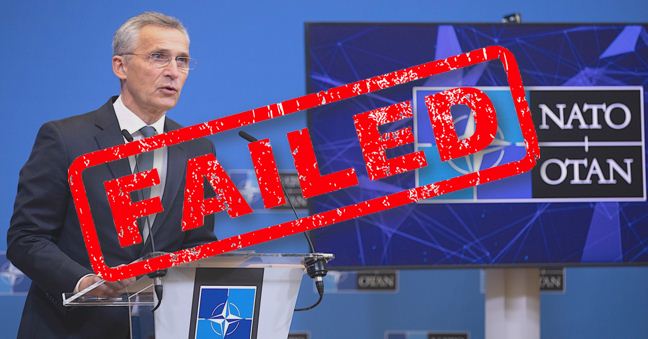 NATO is a headless chicken. It has been reduced into an insignificant entity which when told to shut up by Russia, goes to a corner and quietly sits down – making sure to behave itself. It is quite remarkable how Ukraine thought this organisation would come to its aid in the event of a large-scale Russian invasion. Leave alone military aid, NATO has not even been able to agree on a decisive economic sanctions package that would have an immediate effect on Moscow.

Russia has invaded Ukraine. The world is outraged. The United States and its allies are angry. NATO is infuriated. But here’s the ridiculously painful part: NATO can do nothing but mutely spectate as Russian President Vladimir Putin redefines Eastern Europe. Essentially, NATO has failed. It had one mandate – to protect Europe. It has failed to achieve its primary objective, and this would have lasting consequences for the security alliance.

NATO is an expensive yet useless organisation that American taxpayers fund. The United States pays to keep Europe “safe”. But Europe buys billions of dollars worth of gas from Russia. So, Joe Biden refuses to sanction Russia’s energy sector.

But Biden left out Russia’s energy sector – which in a way, pretty much bankrolls Russia’s economy. Because the Biden administration and NATO merely want to appear to be taking on Russia. They don’t want to antagonise Moscow.

What else explains European countries – led by the likes of Italy, Germany and others vetoing a proposal to ban Russia from using the SWIFT global interbank payments system? You see, data from the Bank of International Settlements (BIS) shows that European lenders hold the lion’s share of the nearly $30 billion in foreign banks’ exposure to Russia.

Late on Thursday, Ukrainian President Volodymyr Zelensky couldn’t keep it to himself any longer. So, in an address to Ukrainians, he lambasted European countries and other Western powers for making false promises.

He said, “I have asked 27 European leaders whether Ukraine will be in NATO… Everyone is afraid, no one answers.” NATO has abandoned Ukraine. Europe – which until recently referred to Ukraine as a compatriot, has failed to provide any substantial and meaningful aid to the country that is being invaded.

Ukraine, by Zelensky’s admission, is all alone. NATO is nowhere to be seen, and the United States is imposing convenient sanctions against Russia which Moscow has grown immune against.

NATO Will Cease to Exist

The invasion of Ukraine has shown that Europe is not united. Every European country is keeping its interests above the supposed idea of protecting ‘Europe’ as a whole. There is no cohesion among European nations, and Joe Biden’s administration remains simply clueless.

Read more: A new world order will arise from the dust of the Russia-Ukraine tensions

The United Kingdom, meanwhile, is thanking its stars that it left Europe at the right time. But the larger message that this fiasco has sent out has not been lost on any country. Now, every European country knows that NATO – for all purposes – is a toothless organisation.

The crisis in Eastern Europe will lay the foundation for the disintegration and ultimate evaporation of NATO.