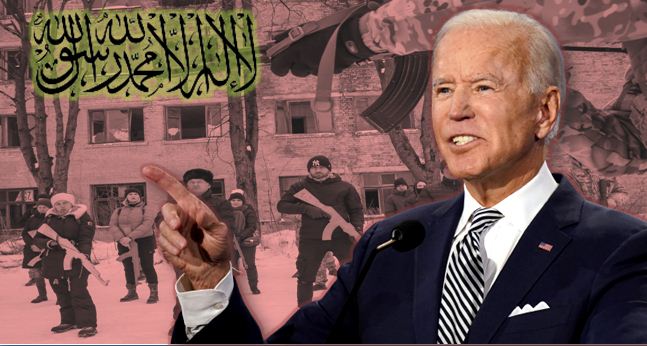 War has broken out in Eastern Europe. Russian forces have invaded Ukraine. Joe Biden – in the initial stages of the Russian onslaught, said he and his wife were “praying” for Ukraine and its people. Biden then went to sleep. Ukraine continues to be pounded by an immeasurable Russian offensive involving ground troops, artillery, missile and rocket strikes and consistent air and naval campaigns. After all, this calamity has only worsened due to Biden’s reckless decision to create another Taliban in Eastern Europe.

These militias hate LGBT and Romani people and attack anti-fascist demonstrations. So, guess what Biden is doing? He is gifting these militias with stinger and javelin missiles. The United States is providing both lethal, as well as non-lethal military aid to Ukraine and its militias. Apart from the Ukrainian army, these militant irregulars will also be engaging in man-to-man combat with Russia. Estimates peg the number of such militants at 130,000.

Read more: A new world order will arise from the dust of the Russia-Ukraine tensions

They will follow the trajectory of the Afghan mujahideen. In the 1980s and 1990s, several Afghan mujahideen groups were armed to the teeth by the United States. This resulted in each group growing very powerful, and later infighting broke out. The Taliban emerged victorious in the aftermath of this infighting, and brutal civil war ensued in Afghanistan.

Today, that very Taliban runs Afghanistan. That Taliban had last year made American forces run with tails between their legs out of Kabul. Yet, Joe Biden has learnt no lessons. What the U.S. did in Afghanistan during the 70s and 80s is being replicated by Joe Biden in Ukraine in 2022. A few years down the line, Ukrainian militia – armed with lethal American weapons will create a security nightmare for NATO in Eastern Europe.

Read more: Biden administration has left lethal weapons and biometric machines with data for the Taliban to use

There is a silver lining, though. Russia might deal with these militias on an immediate basis, thereby saving America the trouble of having to invade Europe after a few years in the name of “counter-terrorism” operations. Meanwhile, Ukraine’s parliament on Wednesday voted to approve a law that permits Ukrainians to carry firearms and act in self-defence.

What is being witnessed in Ukraine is the spread of militant tendencies at the behest of the Biden administration Unorganised groups of bigoted ruffians are being given lethal weapons by the Biden administration. And yet, Russia is being made out to be the repository of all evil. Ask yourself, if your enemy begins arming another enemy of yours, what would be your reaction?

Vladimir Putin asked himself the same question, and the results are out for all of us to see. The Russian invasion of Ukraine might just prove to be the death knell for Biden’s nefarious plans to create a Taliban-like outfit in Eastern Europe.

The immediate effect of the Russia-Ukraine pseudo war is here: US, Europe and China scramble for gas