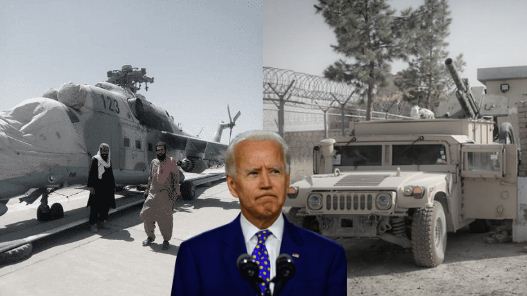 US Preisdent Joe Biden’s awkward troops withdrawal without any discernible exit strategy has put Amercian citizens in Afghanistan and Afghans who worked against the Taliban at risk of great personal harm. Biden hasn’t only gifted away Afghanistan to the Taliban, but has practically allowed it to make hostages out of US citizens in the wartorn country and anti-Taliban Afghanis.

Till now, the US has extracted only 2,000 Afghans who are eligible for Special Immigration Visas. An estimated 86,000 Afghans who ought to be evaluated by the US are still stuck in Afghanistan. Also, the Biden administration has no plans for ensuring the security and evacuation of US citizens in Afghanistan. Meanwhile, Taliban is taking control of American weapons worth billions of Dollars and biometric devices containing information about the vulnerable Afghans.

General Frank McKenzie, the commander of all US troops in the region said that he had warned Taliban leaders “against interference in our evacuation”. Nevertheless, the US citizens in the wartorn country were asked to move towards Kabul airport, however they have been warned that the United States government “cannot guarantee your security as you make this trip”.

US President Joe Biden is unabashedly repudiating his responsibility to evacuate American citizens safely from Afghanistan. Yet, the Biden administration doesn’t seem to admit that it has failed to execute the evacuation of its personnel from Afghanistan properly.

Jake Sullivan, the US National Security Advisor, said, “Yes, there were chaotic scenes [on Monday] but . . . even well-drawn plans don’t survive first contact with reality, and they require adjustments, and we’ve made those adjustments.”

Yet, lack of proper evacuation is not the only problem. We are practically looking at a situation where Taliban could target US citizens and interests in Afghanistan by using American data and weapons. Taliban has reportedly seized U.S. military biometrics devices known as HIDE (Handheld Interagency Identity Detection Equipment), which could help it in identifying Afghans who assisted the coalition forces.

Taliban is a merciless terror organisation and you can imagine what it will do to those Afghans who had assisted the forces fighting against them over the last 20 years.

Talking about the war against the Taliban, Joe Biden’s leaving behind something that the terror spewing organisation can use to cause unimaginable levels of devastation. We are talking about American weapons. While defending his decision to withdraw from Afghanistan, Biden said, “We provided our Afghan partners with all the tools – let me emphasise: all the tools.”

Americans did give a huge cache of arms and ammunition to the Afghan forces. Over the past twenty years of its presence in the wartorn country, the United States has spent a whopping $83 billion in training and equipping the Afghan security forces.

However, when the Biden administration decided to pull troops out of Afghanistan, it presumably failed to make any provisions for destroying or transporting the weapons and equipment left behind. So, the Taliban has suddenly become the a major beneficiary of American weapons and military equipment supplied to Afghanistan.

The Biden administration has admitted that a substantial portion of American weapons has ended up in Taliban’s hands. Sullivan said, “We don’t have a complete picture, obviously, of where every article of defense materials has gone but certainly, a fair amount of it has fallen into the hands of the Taliban, and obviously, we don’t have a sense that they are going to readily hand it over to us at the airport.”

In all fairness, this was bound to happen. When Major General Hank Taylor was asked about what action the US was taking to prevent military equipment from being destroyed or taken over by Taliban, he had responded, “I don’t have the answer to that question.”

Anyhow, Biden’s lack of clarity has turned out to be a weapons bonanza for the Taliban. The captured equipment includes rifles, body armour suits and some expensive weapon systems. Some videos have emerged in which Taliban fighters are seen using  advanced UH-60 Black Hawk attack helicopters. In other videos, they have swapped their Kalashnikovs for American M4 carbines and M16 rifles that have been left behind.

We are talking about top-notch US military hardware that has ended up with the Taliban and if it is no longer a group of fighters with some average Kalashnikovs at its disposal, the US is to be blamed for it. There is visibly no explanation as to why Biden made no arrangements for preventing Taliban from gaining access to US military equipment in Afghanistan.

Biden’s unconditional withdrawal from Afghanistan actually defies all logic. The US President wants to blame Trump for whatever is happening in Afghanistan, but it is clear that Biden’s terrible execution of the US troop pullout is to be blamed for the present turmoil. Had Trump been in power, he would have never agreed to the kind of unconditional withdrawal that Biden has executed.

At the end of the day, the Biden administration seems way too inept to evacuate thousands of US citizens and other interests in Afghanistan. Time is running out for the US as Taliban takes control of American data and weapons in Afghanistan.

Make no mistake, Taliban does have enough connections with rogue regimes like Pakistan and China, and it will find a way to use the tons of data and a huge cache of military equipment at its disposal. Biden has therefore ended up making Taliban even more monstrous.