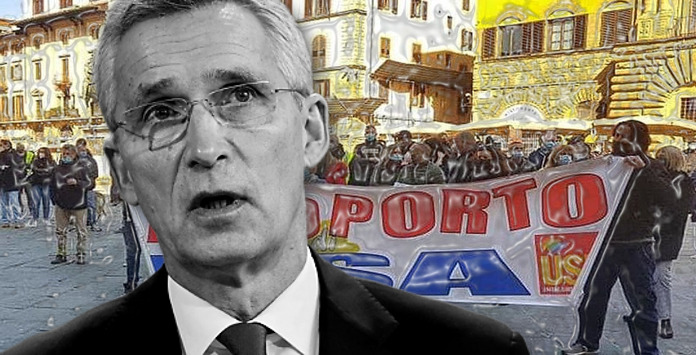 NATO is playing a daredevil stunt in Eastern Europe. Ukraine is not a member of NATO. For all practical reasons, NATO has dumped Ukraine. It is not helping Ukraine in any meaningful way that could decisively tilt the scales of war in Kyiv’s favor. However, NATO is giving its best when it comes to fanning the flames of war in Ukraine by depriving innocent Ukrainians of humanitarian aid, and instead, supplying Ukraine with arms and ammunition.

In the latest news, “humanitarian aid” meant for Ukrainian citizens is being replaced with weapons and ammunition. In Italy’s Pisa, at the Galileo Galilei airport, workers have launched a non-cooperation movement against their government’s ‘falsification’. At the behest of NATO and Washington, the Mario Draghi government of Italy seems to be filling up cargo aircraft with weapons instead of food and medicines.

Airport workers in Italy claim “humanitarian” cargo from Pisa was aimed at fuelling the conflict. According to the Daily Telegraph, several workers at the Galileo Galilei airport refused to load one of the cargo flights advertised as carrying humanitarian aid to Ukraine. In a statement, the Unione Sindacale di Base (USB) – which is one of Italy’s biggest trade unions – said, “We strongly denounce this outright falsification, which cynically uses ‘humanitarian’ aid as cover to fuel the war in Ukraine.”

According to the union, the workers refused to load the military supplies as that would lead to the deaths of their colleagues in Ukraine. This is because such weapon supplies, upon their arrival in Ukraine, are immediately made victims of Russian air and missile strikes. As a result, workers at the Ukrainian bases suffer as collateral.

Here’s what NATO is not doing:

NATO doing none of this because its interests are best served if it remains out of the conflict. Nobody wants a war with Russia. Yet, war helps many powerful companies and groups earn big money. So, war is good for the finances of a select group of people. Therefore, instead of taking meaningful steps to stop the war in Ukraine, NATO is arming the East European country to the teeth with insignificant weapons.

Essentially, NATO is firing shots at Russia from the shoulders of Ukraine and the ultimate victims are the Innocent Ukrainian civilians.

What Ukraine needs right now is humanitarian aid. Ukrainians need food, water, and medicines. Instead of sending such essential supplies to the war-torn nation, NATO and its members are filling the pockets of defense manufacturers with cash to further escalate matters with Russia in Eastern Europe. All of this, purportedly using the money meant to feed hungry and crisis-stricken Ukrainians.

How Russia responds to the falsification of humanitarian cargo by NATO countries is yet to be seen. NATO just made it a whole lot difficult for ordinary Ukrainians to get hold of food and medicines, as it seems now even humanitarian cargo will be indiscriminately targeted by Russia.