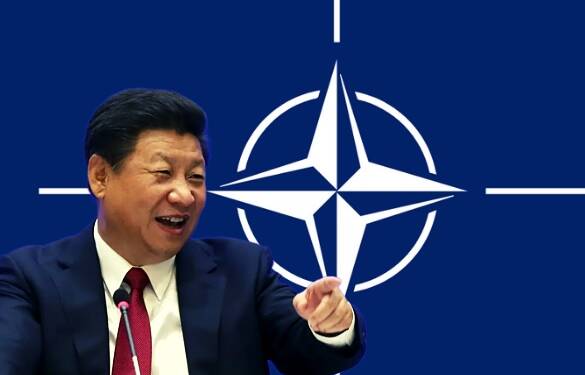 The North Atlantic Treaty Organization lies prostrate at the feet of China. NATO – supposedly a formidable military alliance, has been exposed as a toothless sham of a coterie that serves its own interests. How NATO has left Ukraine in the lurch, all alone and without any real military support is out for all to see. Now here’s the deal. NATO cannot actually come out and ask for help. But as we all know; European nations make up the bulk of NATO.

So, guess who is pleading with China to mediate between Russia and Ukraine? And by meditating, I mean the European Union has fallen flat at the feet of China and is asking for immediate intervention.

EU foreign policy chief Josep Borrell has said, “There is no alternative. We [Europeans] cannot be the mediators, that is clear…And it cannot be the US either. Who else? It has to be China; I trust in that.” According to Borrell, Ukraine needs to be strengthened in order to better place it for negotiations. “And afterwards, diplomacy must play its part,” and here China “must play a role,” Borrell said.

In response to Borrell’s remarks, the Chinese Mission to the EU said in a statement on Saturday, “We believe that to solve the Ukraine crisis, all parties concerned should uphold the purposes and principles of the UN Charter, respect and safeguard the sovereignty and territorial integrity of any country, and resolve disputes through peaceful means.”

The Biden administration’s fascination with China is well documented. But for The North Atlantic Treaty Organization,and the European Union to plead China to mediate between Russia and Ukraine is a new low. China had garnered widespread angst among European nations recently, especially after its targeted harassment of Lithuania.

Yet, at the behest of NATO, the EU seems to have forgotten what a monster China is. Why else would the European Union’s Foreign Policy chief prostrate before China, and depict it as the messiah of the 21st century?

With every such plea that NATO directly or indirectly makes to China, the Communist nation gets emboldened. It thinks of itself as a saviour – and not without cause. If Europe feeds China’s ego, who can blame Xi Jinping for thinking of himself as the greatest leader to ever walk the planet?

Read more: NATO was all set to create a No-Fly Zone over Ukraine, but it chickened out

On Friday, the Secretary-General of the North Atlantic Treaty Organization (NATO), Jens Stoltenberg announced that NATO does not want to “be part of the conflict with Russia in Ukraine.” NATO has also refused to implement a no-fly zone over Ukraine, fearing a pan-European war with Russia.

Yet, NATO and the EU are willing to appease China. The Communist nation can play the role of a mediator, but when Beijing goes hunting for Taiwan, what would the reaction of the United States, NATO and EU be? Surely, Beijing will hold its role as a mediator between Russia and Ukraine to prevent widespread bloodshed in Europe over the head of NATO.

NATO is simply complicating matters in Indo Pacific. It is aiding and abetting the rise of an aggressive China, only to compensate for its lack of a spine.