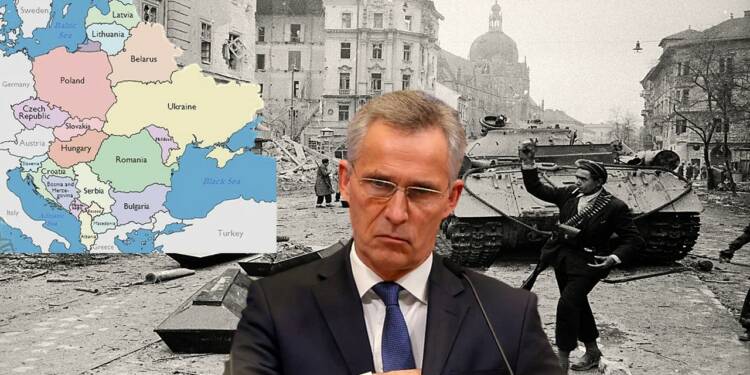 After proving itself feeble to match the Russian might in the eastern European war, NATO is stitching out new plans to employ 300,000 troops at Russian borders in response to the never-ending war of Ukraine.

That would amount to “the biggest overhaul of our collective defence and deterrence since the cold war,” NATO chief Jens Stoltenberg reasoned.

This happens to be a quick change of plans from NATO, that could see stocks of munition and other armaments moving across the Russian borders. Such a situation will only aggravate an already irascible kremlin.

The pastures of Eastern Europe

NATO never confirmed in which country they will station all these forces, but connecting the dots it will be the eastern Europe region that may witness such a happening. Back in February, NATO made deployment of 40,000 troops strong rapid response force for the first time to bolster its eastern flank in Europe, mostly to counter Russian belligerence. NATO had made it a point to view the eastern European region as the theatre of war.

On a different note, why eastern Europe is a question that still no one tends to ponder on. Compared with western Europe, the eastern region falls low when it comes to economic numbers and prosperity index. A richer western Europe has more developed economies and a higher level of income per capita. This difference has already alienated eastern Europe from its western counterparts.

Another brass fact is most of the eastern European countries coalesce in their dependence on Russia for food products. So, NATO’s current move directed particularly at eastern Europe reeks of the erstwhile heinous plot of the Cold war, that gave rise to regional conflicts known as proxy wars.

During the run time of the Ukraine war, contours took shape emulating the cold war era. The U.S initiated the war in both cases and like today it was the Soviet Union on the other side.

Presently, The NATO expansion was running high through the middle east and Afghanistan. And the segue of events made the US-led military force move near the borders of Russia, which incensed Vladimir Putin by large. Rest is what the world is encountering.

NATO eyeing over eastern Europe tells a different tale. A new sort of iron curtain is descending around the world. In front of that line lie the Western European and NATO countries as well as the former Soviet bloc states that have since joined NATO or want to, including the Baltic countries and now Ukraine.

“Essentially, where NATO is going is sort of back to somewhat of a Cold War posture,” said Max Bergmann, director of the Europe Program at the Center for Strategic and International Studies

Baltic countries including especially Estonia punched back at NATO for making the country go teeter at the edge with military exercises that irks Russia. Estonia’s Prime minister Kaja Kallas said the country will be wiped out of the map should Tallinn abides by NATO’s plans. NATO conducted a military exercise in the Baltic, touted as one of the largest, which saw a retort from Russia in the same vigour, only with a more bellicose attitude. This might have given shrills to the power elites in Tallinn.

Read more: Ethiopia is the latest flashpoint in the ongoing US-Russia Cold War 2.0

With the Baltic looking vulnerable and more countries carried away under the high falutin talks of the west, NATO could work their doctrine of giving an umbrella of protection from the Russian offensive. The ensuing scenario will see eastern Europe fissured into factions that may go proxy war against each other. Poland for example displays high animosity towards Europe but treads a fine line when it comes to countering Russia.

NATO with this latest tack could leverage the economic disparities and vulnerable psyche that spreads across the eastern Europe terrain. The fag end will see a new cold war led by NATO not just against Russia but against humanity.