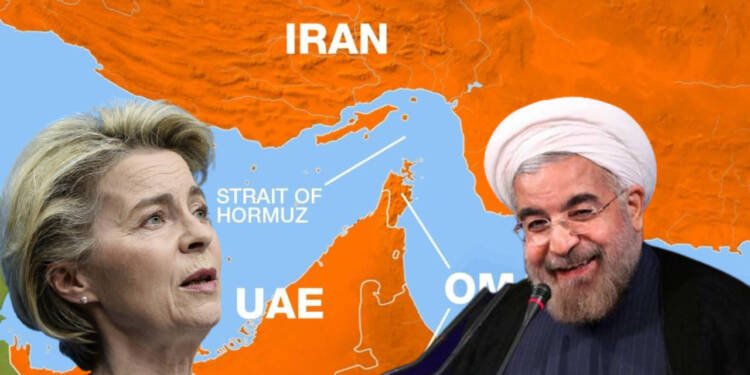 French President Emmanuel Macron’s administration recently made a shocking remark about Iran. It said that it was time for the world to bring Iranian and Venezuelan oil back into the global oil market. It was a message from Europe to the White House that American sanctions on Iranian oil might soon lose global acceptance.

Then, the Greek government on Thursday took a gigantic U-turn on seized Iranian vessel and cargo and declared that the moored vessel will soon be returned to Iran. You see, European capitals are increasingly taking decisions to woo the Iranian government. On Iran, the EU has apparently activated its damage control mode.

The reason for these sudden friendly overtures being made by Europe to Iran is the Shi’ite nation’s unofficial blockade in the Strait of Hormuz, triggered by Greece’s impoundment of a Russian-flagged ship carrying Iranian oil off its waters in early May. The Iranian ship was carrying Russian oil. It was unclear whether the cargo was confiscated due to sanctions on Russian ships or the embargo on Iranian oil. As requested by USA’s treasury department, the Greek authorities were preparing to hand over the seized cargo to the US.

Iran had called this move by Greece an “act of piracy”, and in a retaliatory move, seized two Greek oil tankers near the Persian Gulf. This move by Iran suggested that the Shi’ite nation could seize more Greek oil tankers in the Strait of Hormuz carrying oil from Iraq.

The Strait of Hormuz is a narrow strategic waterway separating Iran from the Gulf states and is one of the world’s most important shipping lanes for crude. Over one-sixth of worldwide oil production and one-third of global liquefied natural gas transit over the 39-kilometre strait. Iran and its revolutionary guards call the shots in this region. It was believed that Iran has outrightly imposed a ban on all Greek shipping companies from sailing in the waters close to the Persian Gulf and the Strait of Hormuz.

Read More: Iran cuts off the last oil supply line to the US and the West

But a regional Greek court ruling could now upend the situation, which has already given a chance to the Greek government to mend its ties with the Iranian government. A Greek government official said, “The court has ruled that the cargo be released. The Greek government was not involved.” The official added that Athens was “very hopeful” the move would lead to the release of two Greek-flagged tankers seized by Iran in retaliation last month.

Iranian media has also confirmed that the Greek government is in the process of releasing the confiscated cargo, and Iran has made preparations to bring the cargo back to Iranian ports. Now, Greece is hopeful that Iran will refrain from attacking any Greek ship sailing in the Persian Gulf, or in simple words, Tehran will lift its unofficial blockade from the Strait of Hormuz.

Through its blockade in the Strait of Hormuz, Iran can effectively block Europe’s access to Iraq’s, Kuwait’s, and UAE’s oil. Obviously, Middle Eastern countries lack an alternative route to carry their oil to the rest of the globe, similar to what Iran presently has. But the worst sufferers are the potential buyers of this oil—the US and Europe!

So, Europe has now embarked on an Iran-luring spree. Iran is being courted by European capitals to relax its hardened stance in the Persian Gulf to shore up their energy security. France’s statement in favour of mainstreaming Iranian oil reflects the growing frustration in Europe against USA’s unilateral and unrealistic sanctions on Iranian oil. So, Europe is now in the process of formulating an Iran policy of its own; one that will bring Iran and EU closer, simply because of the energy reservoirs the Shi’ite nation sits on.