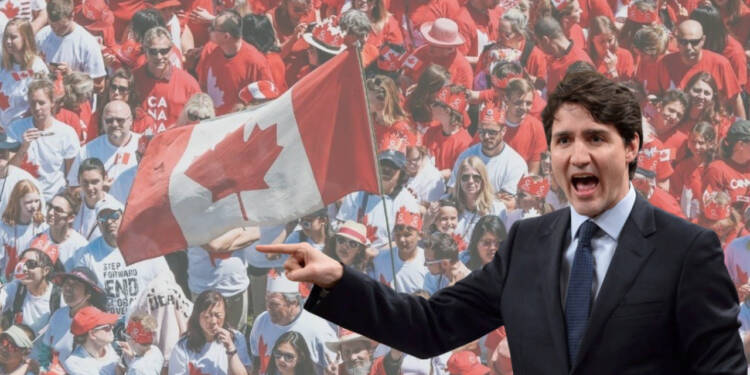 Freedom Convoy is officially back in Canada as ordinary Canadians take it to the streets to protest Trudeau’s authoritarianism on the National Day of Canada. However, Trudeau wasn’t caught off guard this time, who turned Ottawa into a virtual fortress days before the events were actually planned.

As a precautionary move, the administration had already arrested the Freedom Convoy organizer Tamara Lich on charges of mischief, obstructing police, counselling others to commit mischief, and intimidation. The Alberta woman was previously detained in February and later released with a long list of conditions that included a complete ban on her social media activities and an order not to “support anything related to the Freedom Convoy.”

But this gag stopped short of discouraging freedom-loving Canadians from showing up in huge numbers in the streets, which took the Ottawa authorities by surprise. Despite heavy deployment of police personnel from various forces, they were heavily outnumbered by the Freedom March participants.

Police had issued draconian guidelines beforehand to tame the peaceful march. Officials had warned there will be zero tolerance for “unusual noise,” blockading roads, or setting off fireworks this weekend. So, when Freedom protestors started playing music, Police showed up almost immediately to forcibly turn off the speakers.

Tense situation here as we leave the Hill. Police turn our speakers off.

This is a powderkeg. pic.twitter.com/hr0uaWNIjD

Such is the sorry state of Democracy in Canada that people carrying ‘chalk’ were considered a security threat by Ottawa police. People were writing “Free Tamara” on roads using chalks, and that’s what set the warning bells ringing among the authorities. For instance, one participant was fined a whopping $1130 for writing “Free Tamara.” Another was tortured for shouting “Trudeau’s gotta go.”

Protesters in Ottawa are painting "Free Tamara" on the street outside of Parliament. pic.twitter.com/uKZCfVnBuN

A group of lawyers, affiliated with ‘The Democracy Fund’, was threatened with a $1000 bylaw ticket for just showing this poster:

The poster said, “Strengthening Democracy,” which was an obvious threat to the dictatorial regime of Justin Trudeau. The Ottawa Police Service (OPS) accused the peaceful protestors of trying to “occupy” the city. But this treatment is still quite generous on the part of Canadian police since the Canadian RCMP is actually infamous for trampling on peaceful protestors.

However, Police did everything at their disposal to harass ‘the Freedom Convoy’ as much as they could. The Globe and Mail reported that Ottawa’s bylaw service issued 275 parking tickets and towed 72 vehicles since Wednesday to trouble the protestors at Trudeau’s behest.

Such brazen politicization of police and criminalization of peaceful protests is unprecedented in any functioning democracy on this planet. Canada is fast becoming a hell hole for White and conservative Canadians as it keeps on attracting Islamists and rabid Khalistani terrorists from across the world.

This brazen display of authoritarianism and abusing policing by Justin Trudeau is the admission of his loss before the Freedom Convoy. Even as Canadian mainstream media goes the extra mile to declare the Freedom Convoy unconstitutional and unlawful, the people of Canada know what values the convoy actually stands for! Truckers dominated the scene at Downtown Ottawa, and that’s what is sending shivers down the spine of a coward and politically neutered Justin Trudeau.