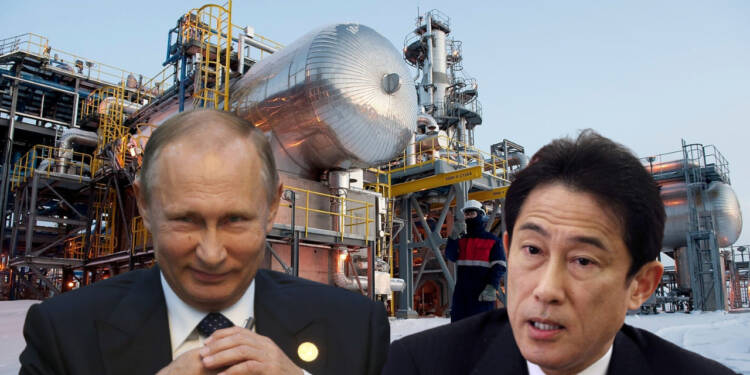 Russian President Vladimir Putin might have dropped a $15 billion bombshell on the Japanese economy. As per media reports, Japan could soon be kicked out of Russia’s Sakhalin-2 gas project. Once this happens, the void emerged after Japan’s exit would there be up for grabs for China. And that would be a nightmare scenario for Japan.

As per a Nikkei Asia report, Russian President Vladimir Putin on Thursday announced that the assets of Sakhalin-2 will be transferred to a newly established Russian corporation without compensation. Now, this announcement has raised concerns in Tokyo that Mitsui & Co. and Mitsubishi Corp., the two Japanese participants in the project, may now be expelled from the project.

The report added, “Sakhalin Energy’s foreign shareholders can participate as shareholders in the new company, but only if they agree to the conditions of the Russian authorities. If they refuse, the Japanese trading companies could lose their investment in Sakhalin-2.”

Why is Sakhalin-2 project important for Japan?

The Sakhalin-2 project is vital for Japan’s energy security, as 10% of the country’s total LNG imports come from here. Sakhalin-2 produces about 10 million tons of liquefied natural gas (LNG) per year, 6 million of which go to Japan. Whereas shipments can take more than two weeks from Qatar and three weeks from the U.S. to reach East Asia, LNG carriers from Sakhalin can arrive in days. So, the Sakhalin-2 project is, indeed, of great importance to Tokyo.

It may be noted that the expulsion of its companies from the much sought-after project might not be the only setback for Japan here. Things can very well go haywire if China swoops up the lucrative share. In February, when UK’s Shell announced its plan to exit the Sakhalin-2 gas project, Chinese companies didn’t waste a minute in lining up for the shares. So, it’s a foregone conclusion that the Chinese companies will strive to grab Mitsui’s and Mitsubishi’s shares too.

In that scenario, China will attain a position where it can wield its influence on the project to undermine Japan’s energy security. If China goes on to acquire shares of Shell, Mitsui and Mitsubishi, it will get to buy 50% stakes in the project, that Beijing would be able to use to intimidate Japan.

You see, the West’s efforts to ostracize Russia on the world stage have proven to be a catastrophe for Japan. The West is hell-bent on reducing Russia to be a junior partner of China, which is a grave threat to Japan’s national security. Amicable ties with Russia are a prerequisite for Japan to maintain stability in its economy and peace at its borders.

India: The only silver line here for Japan

Even the Japanese government has previously acknowledged the importance of this key project. Last month, Economy, Trade and Industry Minister of Japan Koichi Hagiuda said, “Sakhalin-2 is an asset that our predecessors worked hard to acquire. The owner of the land may be Russia, but the leasehold and the liquefaction and transportation equipment belong to the Japanese government and Japanese companies. We do not intend to leave, even if we are told [to do so].” However, now Putin has unexpectedly pulled a fast one on Japan.

Read our premium story: China could end up controlling Japan’s gas and it’s all Japan’s mistake

But it was given because of Japan’s Prime Minister Fumio Kishida’s ill-thought campaign to support the Biden White House’s anti-Russia campaign. Had Japan adopted a neutral stance on the Russia-Ukraine crisis, the situation would have been much better for Japan. Kishida’s blatant attempts to sideline Russia have already ruined the ongoing peace efforts between Russia and Japan over the Kuril Islands dispute. Not only did Russia scrap the peace talks with Japan but also attempted to destabilize Japan’s security environment by launching military drills off Japan’s shores soon after Kishida joined Biden’s anti-Russia rally.

Now, only India can prevent China and Russia from jeopardizing Japan’s energy security. The Indian government officials have confirmed that India has instructed its State-owned energy companies to consider buying Russian oil assets. Fortunately, Indian companies are also lined up to throw a spanner in the works of Chinese companies attempting to stage a hostile takeover of the Sakhalin-2 project. If India gets to usurp these shares, Japan will still find itself sailing in safe waters.