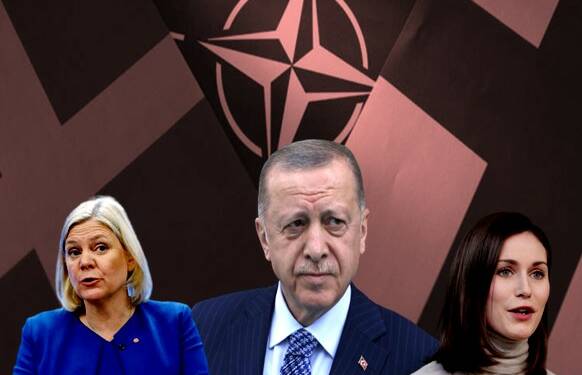 Turkey and its president Recep Tayyip Erdoğan received an unexpected rude shock from Sweden and Finland. Both nations, in unison, recently clarified that they will not extradite the demanded Kurdish individuals to Turkey that the latter considers terrorists. In response, an infuriated Erdogan has warned that he would again throw a spanner into the works of Sweden’s and Finland’s NATO application if the Nordic nations renege on their promises.

Mind the fact that Turkey and the Nordic nations had reached a 10-point agreement late last month that allegedly included a condition for Sweden and Finland to extradite demanded individuals to Turkey. In return, Ankara had lifted its veto on the question of the Swedish and Finnish NATO bid. However, recent statements from Swedish and Finnish leaders signal the thaw might be ephemeral.

Pekka Haavisto, the foreign minister of Finland, explained on Friday, “According to Finland’s commitments, we cannot send anyone to the death penalty or torture.” He added, “When we talk about extraditions, it requires that the person has committed a terrorist crime or preparation for such a crime, proven in Finland.”

Speaking of Sweden, the country also failed to offer any relief to Turkey. Swedish Justice Minister Morgan Johansson on Friday said, “In Sweden, Swedish law is applied by independent courts. Swedish citizens are not extradited. Non-Swedish citizens can be extradited at the request of other countries, but only if it is compatible with Swedish law and the European Convention.”

Moreover, the Swedish Prime Minister, Magdalena Andersson on Wednesday said, “I know there are some people who are worried that we’re going to start to hunt people and extradite them, and I think it’s important to say that we always follow Swedish laws and international conventions, and we never extradite Swedish citizens.”

You might be wondering why such statements are being put forward by Sweden and Finland at this point of time, even as they realize this could jeopardize their NATO application bid. The answer to this question is : Domestic political pressure. For instance, an independent Kurdish lawmaker in Sweden, Amineh Kakabaveh, with support from right-wing groups, has opened a front against the government accusing it of surrendering the country’s sovereignty to Turkey.

While commenting on the said agreement reached between Sweden and Finland, Kakabaveh said, “This is a black day in Swedish political history. We are negotiating with a regime which does not respect freedom of expression or the rights of minority groups.” It must be noted that it was Kakabaveh, whose vote gave a new lease of life to the Swedish government in a crucial no-confidence motion tabled in the parliament last month, after getting reassurances from the government. For the Swedish government to save its political fortunes, keeping Kakabaveh in good humour is a prerequisite. Hence, the Swedish government is treading a tight rope here.

But this apparent U-turn on Sweden’s and Finland’s part has angered the Turkish president in epic proportions. Erdoğan claimed that Sweden had promised to extradite 73 “terrorists” to Turkey and crack down on the financing and recruitment activities of the Kurdistan Workers’ party (PKK) –– listed as a terrorist group by the US and the EU –– and linked groups.

Erdogan was quoted as saying by AFP, “This business will not work if we don’t pass this in our parliament. First, Sweden and Finland must fulfil their duties and those are already in the text … But if they don’t fulfil these, then of course there is no way we would send it to our parliament.”

You see, in order to shore up his domestic approval ratings, which are already driven to the ground, Erdogan’s forced to take an unrelenting stance on the question of the Kurdish movement. Thus, it’s highly likely that Turkey might end up vetoing Sweden’s and Finland’s membership bid, thus shattering USA’s ambitions of expanding NATO further eastwards.

Collection of 22 The old man and the sea quotes