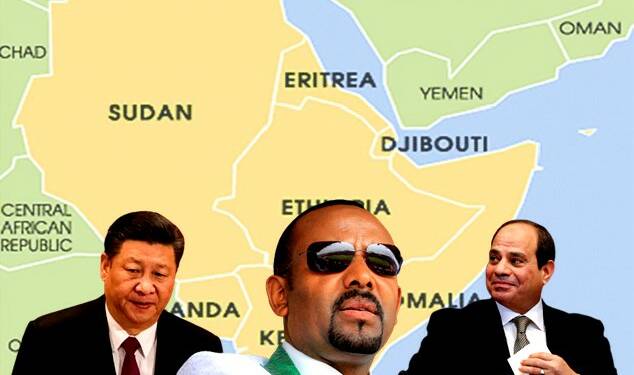 In January 2022, drifting away from his usual self, Chinese foreign minister Wang Yi announced, all of a sudden, the appointment of a special envoy to the Horn of Africa. Wang framed the announcement as an “Initiative of Peaceful Development in the Horn of Africa”.

The horn of Africa, also known as the Somali peninsula, is a large area in the eastern African region. It is composed of countries like Ethiopia, Eritrea, Somalia, Somaliland, and Djibouti.

Beijing’s hasty efforts to discuss and resolve the problem demonstrate the region’s importance and the geopolitical influence China yearns for in the Horn of Africa region.

Everything started with the construction of the Grand Ethiopian Renaissance Dam, a project that Addis Ababa is building on the Blue Nile, the main tributary of the River Nile, at a cost of $5 billion. This has invariably raised tensions with Egypt and Sudan, as they both fear it will threaten their ‘water security’.

Tensions transcended to a more hostile relationship between these countries as Ethiopia announced the completion of the second filling phase of the dam’s reservoir, despite Egypt and Sudan’s rejection.

Superpowers are interested in the horn of Africa because it has a significant amount of undiscovered natural resources. Additionally, the area provides a favourable environment for investors, and we know China won’t let such a chance slip from its hands.

Ethiopia being a stable force in the region moves in good pacts with Beijing. During his meeting with Xue in March, Ethiopian Deputy Prime Minister and Foreign Minister Demeke Mekonnen praised “China’s support for his country in international forums”. He said that “Beijing has helped his country thwart threats to its sovereignty and territorial integrity.”

John Calabrese, director of the Middle East-Asia Project at the Middle East Institute told that Ethiopia is a regional “heavyweight” in the Horn of Africa. “It appears that Beijing sees Ethiopia as a key outpost from which to extend its political influence and commercial reach,” he further added.

You see, China, along with Russia, has gone to such lengths to support Ethiopia’s stand against rebel Tigray forces thereby taking the opportune moment to become the most trusted ally in this region. China also opposed US sanctions on Ethiopia and Eritrea, both accused of committing brutal rapes and massacres in Tigray.

China then made a quick leap in financing the GERD project with a loan of $1 billion. Beijing is also investing $1.8 billion to fund the expansion of Ethiopia’s electricity grid while two Chinese companies are involved in building the GERD.

Furthermore, China also has huge investments in Egypt and Sudan with a big say in financing the new administrative capital being built outside Cairo of which the China State Construction Engineering Corporation is one of the main contractors.

Read more:Biden has abandoned TPLF but is still dreaming of invading Ethiopia through Sudan

And Sudan remains one of the first countries to sign the infamous ‘Belt and Road Initiative’ in Africa and for a certain period it was Beijing who topped the list of Sudan’s strategic partners. Chinese investments in Sudan are distributed in the oil, infrastructure, agriculture, and mining sectors.

China jumping headlong into the Nile dam dispute has not aligned with either Egypt’s or Sudan’s interests. Both Egypt and Sudan have placed their bet on the UN Security Council and not Beijing to end the dispute. The popular view goes that China harbours a softer approach when it comes to Ethiopia.

So, China’s position in the Nile dam dispute hangs in balance and is prone to get the wrath of both Egypt and Sudan. With Egypt and Sudan giving signs for China to step back from its mediatory role, it is sure that Beijing’s pattern of wresting control over the horn of Africa needs a rework.