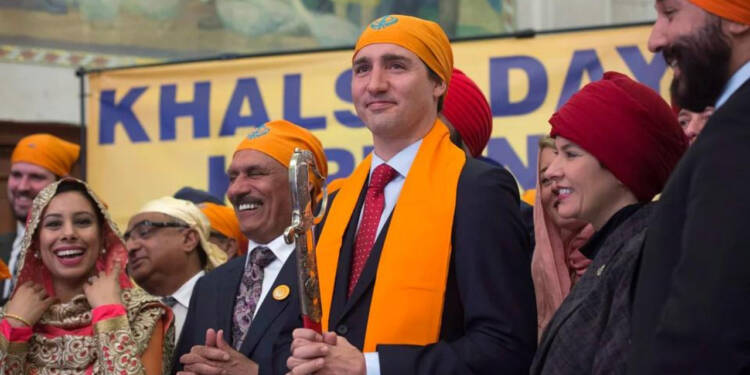 All people are equal but some people are more equal than others. In Canada, such people are called Khalistanis and rabid Islamists. You see, everything is rotten in the state of Canada, where immigrants have effectively hijacked the driving seat of the administration and the natives have been systematically reduced to secondary citizens in their own nation.

For instance, see this: The Canadian city of Toronto recently apologised to the World Sikh Organization of Canada for terminating over 100 Sikh security guards over the ‘no beard’ policy. The question for the 100 security guards was simple. They had to choose between their jobs and their faith. As an Indian, I’m ashamed about the fact that these 100 folks chose religion over their nation.

And then, this question strikes me the next moment: Are they even real Sikhs? Sikhism stands for unity and equality of all humankind; Sikhism calls for selfless ‘seva’ or ‘service’ and it never advocates super-imposition of its beliefs over others. There are Sikhs in Canada who truly abide by these values and live an honest life, just like an immigrant should ideally behave on foreign soil, not like these spoiled brats, who keep hunting for opportunities to flex their strong political muscles.On Canadian soil, Canadian laws must prevail every time without fail. It’s as simple as that! This has nothing to do with human rights and religious freedom but with religious extremism.

The movement being spearheaded by Jagmeet Singh

This Khalistani movement in Canada is spearheaded by none other than Jagmeet Singh, a proven Khalistani and the leader of the New Democratic Party. On matters of national security, including Khalistani terrorism, it’s an open secret that Jagmeet Singh is the one controlling the strings of the Trudeau administration.

In 2014, the Indian government denied Singh a visa to visit India on grounds of his unabated support to the Khalistan movement, which advocates carving out a separate nation for Sikhs in India. Denying him a visa, the Indian government had accused him of misusing the human rights cause to pursue his “insidious agenda of disturbing the social fabric of India and undermining the peace, harmony and territorial integrity of India”. In 2015 and 2016, Jagmeet Singh was spotted attending various anti-India events in Canada and abroad. Today, when he sits at the helm in Canada, such a brazen display of Khalistani extremism seems hardly surprising.

It’s time to wake up

Speaking of those 100 guards, who chose to breach Canadian laws just to prove the mettle of their political impunity, they have brought nothing other than shame to Sikhism. They could have opted for other jobs that don’t require them to shave off their beard. This way, they could have upheld their religious beliefs as well as their loyalty toward the host nation.

Today, Canada has been hijacked by such Khalistani extremist elements. Immigration should be welcomed, but only as long as it doesn’t clash with the values and culture of the host country. In Canada’s case, the situation is the exact opposite. Islamists and Khalistanis call the shot here, and leaders like Justin Trudeau keep pandering to them. For Canadian conservatives, it’s time to wake up and exact their pound of flesh from these Khalistani hijackers. Otherwise, we’ll soon see the proud nation of Canada coming crashing down.