A Khalistani Prime Minister and an Islamist cabinet: Dear Canadians, here’s your future 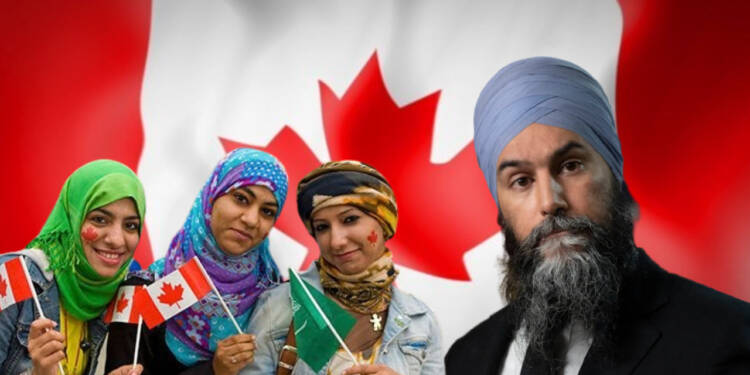 Long back veteran journalist Terry Milewski dedicated a good lot of his time to peruse through the intricacies and shifts happening within the demography in Canada. The final reckoning of his study was released by Macdonald-Laurier Institute and it was shockingly titled “Khalistan: A project of Pakistan.” Milewski craned his neck into the study and the outcome revealed how this was a geopolitical project nurtured by Pakistan.

“It might seem surprising that 35 years after Khalistani extremists bombed Air India Flight 182, the deadliest attack on aviation before 9/11 that a new generation of violent extremists has now emerged in Canada and India”, wrote Terry Milewski.


New Delhi has time and again warned the highest podium of the UN about the threat possessed by the Khalistan elements that work in accordance with their masters in Islamabad.

The Mohali blast of last month also adds to the claim about the cordial terms in which both ISI and Khalistan operate.

“The key conspirator Lakhbir Singh Landa is a resident of Tarn Taran district. The gangster shifted to Canada in 2017. He has been closely associated with Pakistan-based terrorist Harvinder Singh Rinda. Rinda is in close proximity to Pak ISI. “ DGP Punjab Police V.K. Bhawra has quoted.

Pak intelligence and Khalistan share a camaraderie more like, an act of compulsion since their religious tenets could never integrate. Baloch activist Karima Baloch’s murder in Toronto during the shivering winter of December 2020 is a testament to the same. Meanwhile, India’s countless dossiers addressing the issue to international bodies got tanked completely by the cabals of the left.

Straight to now, the politics is broadening up with the flooding of Muslims across the demarcation lines to Canada. The North American country has built a reputation over the last half-century for welcoming immigrants. Foreign-born people make up about one-fifth of Canada’s population—one of the highest ratios for industrialized Western countries.

The facile attitude employed by successive administrations has been a boon for the radical elements as Islam has now become the second-largest religion in Canada. Like anywhere else, penury-driven life and the prospect of better education happen to be the core reason for the migration.

The fertility rate for Muslims in Canada is higher than the rate for other Canadians (an average of 2.4 children per woman for Muslims in 2001, compared with 1.6 children per woman for other populations in Canada). The number of Canadians who identify themselves as Muslim will reach 2.7 million by 2030, up from approximately 940,000 today. Moreover, the fertility rate among Khalistan population is also matching the burgeoning rise within the Muslim community in Canada.

The happenings unfolding in Canada run parallel with what the UK is currently sailing through. The ghettos of Birmingham have got more than one story to reveal to the world. In 2018, 27% of the Birmingham population identified themselves as Muslim. This is significantly higher than the average for England and Wales of 4.8%. In a working-class and overwhelmingly Muslim area, the busy streets of Birmingham are lined with £1 shops, Arab bakeries, and Pakistani travel agents.

Shariah is a mainstay in this area and women folks are denied the freedom to wear the dress of their liking in order to upkeep the niceties of the tenets they follow. The region was recently in the spotlight for being marked as a no-go zone area connecting with the extremism sprouting in dozens.

​​Canada will soon be a synonym for religious imbroglio unless a major revival in the immigration policies happens. The Birmingham model is currently imitated in the provinces of Ontario and Quebec where the Muslim population is on the rise. Adding to the worries the fertility rates of white children in Canada have reached their nadir.

In 2020, Canada also experienced the lowest number of births since 2007 and the greatest year-over-year decrease in births (-3.6%) since 1997. If the country’s fertility continues to decline further in the coming years, Canada could join the countries with the “lowest-low” fertility rates (1.3 or less children per woman).

The improving Muslims-Khalistan bonhomie may rupture the demography of Canada to shreds. Let’s say in 15 years from now, Canada could see a tectonic shift with a Khalistani prime minister and a new cabinet embossed with radical Islamists. Australia is living through that transition. Anne Aly and Ed Husic were sworn in the Australian parliaments as ministers by holding Quran. UK is a lost cause with London now under the helm of rabid Islamist Sadiq Khan.

Canada is next in line and it deserves someone who could mirror the nous and ruthlessness of Donald Trump. Andrew Scheer of the Conservative party is still a long walk from being a Trump. With the muscle power of Muslims and economic power within the Khalistansis, Canada’s stake in the geopolitical map is slowly fading.

In 15 years, Canada will change and the paltry few whites from Canada will pack their bags bidding adieu to the land they once held dear.

Collection of 35 No one is permanent quotes and captions