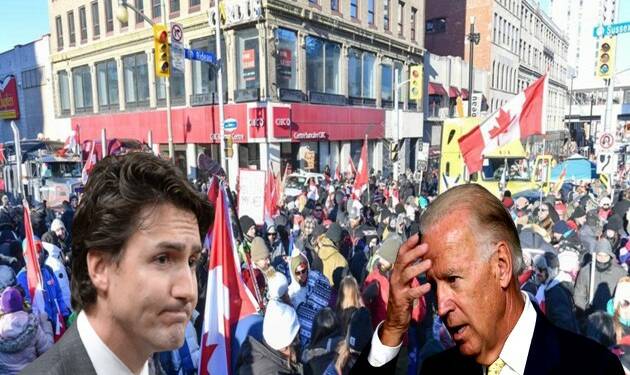 Canada’s devotion to the United States when it comes to trade is unparalleled. Perhaps geography is a key factor in making the trade agreements materialise easily. But make no mistake, one of the major factors is unwillingness of Canada to diversify trade from the US, fearing a dent in their relationship.

Canada and US have a $1.6 trillion bilateral trade and investment relationship. Canada ranks as the top U.S. export market, accounting for 17.9% of all U.S. goods exports. Canada and the United States trade $1.7 billion in goods and services daily.

We all know that the US involvement in the Ukraine war didn’t bode well for the Biden administration. The humiliation in eastern Europe has also been reflected in the economy of the United States which is teetering on the edge of recession. Real wages are falling. Productivity growth is down. Companies aren’t competitive in global markets. White-collar jobs are no longer secure and there goes a range of other issues that still need to be solved.

You see, a battered US economy will have grave repercussions for neighbouring Canada. Ottawa might share a blind trust with Washington but the strong bonhomie will be tested in the coming months after the Royal Bank of Canada made an unusual statement.

Royal Bank of Canada became the first of the country’s major banks to predict that the nation’s economy will fall into a recession in 2023 amid four-decade high inflation, historic labour shortages and aggressive interest-rate hikes.

“Though higher rates will technically push Canada toward a contraction, the Bank of Canada now has little choice but to act,” according to a report written by economists Nathan Janzen and Claire Fan. “Inflation has been too strong for too long and is starting to creep into longer-run business and consumer expectations.”

Mired in tension, there seems no hope reserved for Canada as its strongest trade ally is passing through an unprecedented crisis. The US unemployment rate is expected to climb and emerging markets will struggle with higher food and energy prices and borrowing costs, acting as a drag on Canadian exports.

Will the US-Canada friendship suffer?

The Ukraine war provided Canada with an option to diverge from the US line of politics, but the Justin Trudeau-led government cared less about the issue and never seemed to understand the aftereffects it would spill on the economy of the two nations. The US remote-controlled the Canadian government to such an extent that the vulnerable side of Washington in the Ukraine war went unnoticed by the Trudeau government.

In the past, Canada saw the golden days of trade with India. Canada’s economic partnership with India was about $100 billion. Two-way trade went into tenterhooks after the Justin Trudeau government failed to distance away from its support for radical Khalistani forces. The government of India has made an unflinching stand of not doing trade with Canada unless it moves away from the shackles of fringe factions like the Khalistan movement.

Read more:Khalistanis have hijacked Canada in its entirety, and there’s only one way out of it

But the case in point is Justin Trudeau’s complete denial of the whole ruckus that surrounds the Canadian economy. Trudeau is still looking to barge ahead with futile sanctions on Russia to make his American masters happy.

The statement from the Royal Bank of Canada should ring alarm bells for all the good reasons. One can only expect the government in Canada to take a pragmatic approach to abate the tensions circling the economy and move away from WASHINGTON. But Trudeau is a man Friday of Joe Biden and expecting something pragmatic from him will be similar to the lines of expecting Ukraine to win the war.