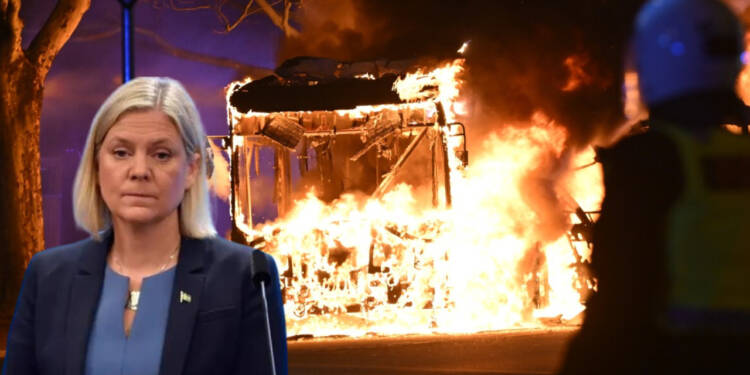 There is a common perception among many that when it comes to prosperity, Scandinavian countries top the list. Sweden has been in that elite category for long. In the overall prosperity index, the country is 3rd among 149 countries.

But unless you are not detached from the present-day politics, it will be hard for you to still believe in the prized prosperity rank that Sweden holds dear. No, the issue is not NATO, but Sweden’s demography which is under grave threat.

Sweden trying all the tactics in the world to get into NATO got coverage more than it deserves. In all honesty, the whole episode had every ingredient needed to challenge a good old ’90s soap opera’. Turkey giving assent to NATO after bringing Sweden to its knees and the lone Kurdish MP giving a tough time to the Magdalena Anderson-led government filled every corner of news in Sweden.

Not NATO, Sweden has bigger issues to address

Rather Sweden got all the attention in the world for the angered protest perpetuated by rabid Islamists who entered the country seeking asylum. Sweden has long carried the tag of a progressive nation where any kind of debate was entertained in the healthiest way possible. But the overall ethos and culture that the country wore with pride are facing a serious threat of extinction. Thanks to migrants and mostly fundamentalists from West Asia.

Protesters, mostly immigrants and Muslims from West Asia and North Africa attacking the police have become an everyday scenario in Sweden. The reason for the protest was mostly trivial like someone debated something that went against the tenants of Islam, or like any guy questioning the claims included in the holy book that Muslims pray.

In Rosengard district, angered youth set fire to car tires, debris, and garbage cans and attacked policemen who were then forced to respond by firing tear gas into the crowd, who were also pelting stones at cops.

Swedish society, which has stood up for multiculturalism and stood against racism, has also now become aware that there is a certain section of migrants in Sweden who are not interested in assimilation and threaten to impose their values on Swedish society.

And then the latest news emerged but was overshadowed by the big discussion of NATO and Turkey. The news is everything that the Swedish society must discuss in the coming days. Half of the police officers who attended the Muslim Easter riots in the city of Örebro say that they have experienced mental health problems following the violence that saw several officers attacked and injured.

Rasmus Paludan, a right-wing politician led a protest growing tired of the appeasing politics being showered on the Muslim extremist in Sweden. This eventually led to a counter-protest from Islamists and ended with the city of Örebro going into chaos.

Read more: NATO can wait; Sweden has a score to settle with Islamists

“Initially, we had quite a few sick leaves, partly due to physical problems but also for… mental problems. There are a lot of thoughts and concerns, as there were many police officers who feared for their lives,” Erik Hiding, chairman of the Police Federation in the region of Bergslagen, told broadcaster SVT.

A total of 135 officers were present during the riots in Sveaparketm and 50 officers were forced to seek medical treatment due to the violence against them by the mob of rioters, with reports of officers suffering various injuries such as bone fractures, concussions, and damage to teeth after the rioters hurled rocks and other projectiles.

For various reasons, the Swedish government is keeping a quiet attitude to these happenings. May be to not trigger further issues ahead of the decisive September elections. News regarding Islamist wreaking havoc in Sweden headlined even in the past, but the government did nothing other than peaceful talks to appease the particular section. But it should be minded that it is the law enforcers who are wrestling with these fringe elements to protect their country. At least the government in Sweden should make prior the safety of the police officers, only if there happens some spare time after the big NATO talks.

Not only Germany, Winters may not be good for the old Russian pal — Italy