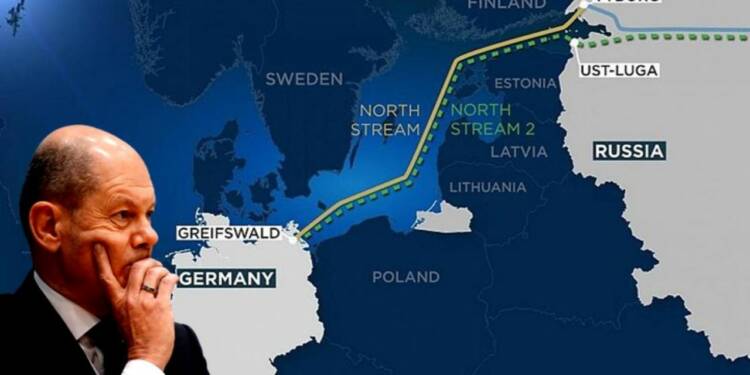 The conflict in Russia and Ukraine hasn’t bode well for Western Nations.  The West, particularly Germany, has been pushing up for implementing an energy embargo against Russia since the invasion of Ukraine. In the middle of the Russia-Ukraine conflict, Germany continued to block the Nord Stream 2 project.  As a penalty, Putin threatened to cut off gas supplies from the Nord Stream1 pipeline.

This left Germany with no option but to make sure that Nord Stream 2 is reactivated. Recently, a senior German lawmaker, Klaus Ernst, called for an end to sanctions against Russia and for the launch of the controversial Nord Stream 2 gas pipeline.  The final assurance of activating the Nord stream 2 has come this time directly from the EU’s top court — the European Court of Justice (ECJ).

You see, Nord Stream is a network of offshore natural gas pipes in Europe that goes from Russia to Germany under the Baltic Sea. It includes the two Nord Stream 1 pipelines, which run from Vyborg in northwest Russia to Finland, and the two Nord Stream 2 pipes, which travel from Ust-Luga to Estonia. Both pipelines lead to Lubmin, in the German state of Mecklenburg-Vorpommern, in the northeast.

In the midst of the Russia-Ukraine conflict, Germany went on to suspend the Nord Stream-2 pipelines. Later, as retribution, Russian energy giant Gazprom limited gas delivery to Germany via the Nord Stream 1 Baltic Sea pipeline, alleging technical issues and delays by Siemens, a Munich-based automation business. Furthermore, in the mid of July, the gas from Nord Stream 1 would be completely cut off for two weeks as it will undergo annual summer maintenance.

And now, Germany is going haywire amid this!  You see, a few months back Berlin raised the alarm that the winters may become harsh for Germans as the gas supplies are running extremely low. The closure of Nord Stream 1 will only further exacerbate the crisis that Germany is currently embroiled in.

Without a doubt, Berlin regrets its decision to impose sanctions on Russian gas. As a result, it is working to ensure that Nord Stream 2 is turned on as soon as possible. Berlin is further making sure that the Nord Stream 2 project won’t be hampered by any political or legal obstacles.

All legal hurdles to be cleared

You see, the pipeline under the Baltic Sea was completed by Nord Stream 2 AG, a subsidiary of the Russian gas giant Gazprom, but it was challenged in the European General Court in 2020 on the grounds of EU regulations. The Nord Stream 2 pipeline has to be built, operated, and owned by different companies in accordance with EU regulations. As a result, the Nord Stream 2 AG’s rights were contested before the European General Court in 2020. Even though the EU General Court disagreed that the Swiss company would be affected by the verdict, the corporation wasn’t sure, so it decided to appeal to the ECJ.

And recently, Nord Stream 2 AG won an appeal in the EU’s top court, thereby challenging the European Union’s rules. The ECJ stated that “the General Court was wrong to hold that Nord Stream 2 AG was not directly concerned”. Therefore, the ECJ ensured that the business wouldn’t encounter any obstacles when operating the Nord Stream 2 pipeline, which will undoubtedly be launched shortly as Germany’s future depends on it.

Nevertheless, Germany anyway had no other option because it was impossible for Germany to find any substitute for Russian gas. Hence, Germany is pushing all its limits to reactivate the pipeline.