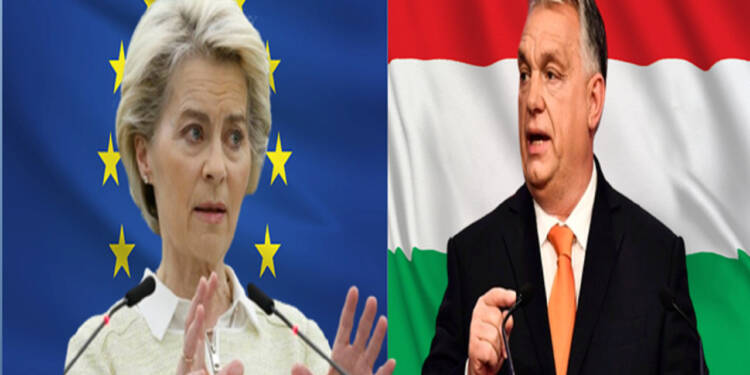 Hungary has had enough of the European Union’s diktats. The continuous attempts of the EU to strip Hungary of its energy supplies have backfired spectacularly.

The European Union’s existence has been trampled underfoot by Hungary. This was unexpected for Europe because its intimidation of Hungary provided the ideal setting for Budapest’s decision. As per the recent move, Hungary’s parliament has disbanded the European Parliament, a decision that will have serious repercussions for the European Union.

On Tuesday, lawmakers of Hungary passed a resolution demanding a reduction in the EU Parliament’s powers.

Members of Viktor Orbán’s Fidesz party in Hungary voted to adopt the motion. The move provides Hungary’s parliament with the authority to nullify any bill that the EU proposes.  It further said that national governments should delegate representatives to the EU Parliament. This stands in contrast to the current system, where the voters of each nation elect the parliamentarians. 130 people voted in favour of the bill, while 50 people were against it.

Hungary alleges that the EU Parliament has brought European democracy to a “dead end.” And Hungary isn’t wrong for that matter.

You see, European Parliament has become a neo-imperialist engine for the bigger countries. The bulk of the European Parliamentarians represent nations like Germany, France, and Italy, which account for over 35% of the seats in the EU parliament.

Through the EU Parliament, the voice of smaller European, Baltic, and Balkan nations is being muted.

After Hungary attempted to use its veto power to block the EU from sanctioning Russian gas and oil last month, the EU put up a proposal to amend the current treaty and eliminate the vetoing power. Nevertheless, this treaty is a saviour for many of the smaller European countries, allowing them to express their concerns. Hungary has been at odds with Brussels ever since it used its veto power to help Russia.

In addition to this, Hungary is being sued by the European Commission at the European Court of Justice over LGBTQ law and a decision to revoke the broadcast licence of the last independent radio station in the nation.

As a retaliating move, last week, the EU decided to withhold billions in recovery funds and credit to Hungary without giving any proper explanation. EU is also eyeing Hungary’s gas reserves. European People’s Party President Manfred Weber had told a German newspaper Der Tagesspiegalearlier this month that the EU needed “binding mechanisms on how to deal with the gas that is in the storage tanks in solidarity so that everyone doesn’t just look at themselves.”

The relentless bullying by the EU has annoyed Hungary. And when it looked at gas reserves of Hungary, Budapest decided to bring in a law to shield itself from the EU Parliament dictatorship.

Szijjarto took a jibe at Weber and said that the proposal reminds him of communism.

The resolution said that EU treaties are not adequate for cooperation in a time of crisis. This would weaken the bloc’s overall influence and limit the European Parliament’s capacity to pass rules that would impact Hungary.

The proposed treaty changes and the bullying of countries that don’t adhere to the EU’s whims and fancies defeat the purpose of the European Union. Be prepared if smaller nations pass such legislations sooner to protect themselves from EU directives or begin to quit the EU, like Britain.

Data shows that Trudeau is an illegitimate Prime Minister of Canada