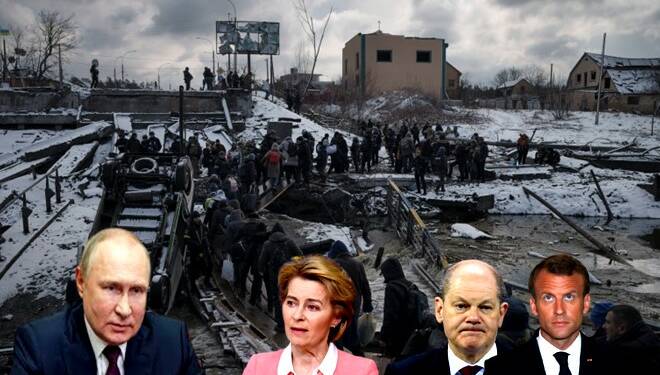 The world’s perception began to shift in Putin’s favour after people grasped the Western hypocrisy and that Moscow’s aggression in Ukraine was a calculated effort to defend its borders from the presence of NATO forces. Zelensky, on the other hand, in order to fuel his ambitions, pushed his country into a war, it could never have won.

The West came up with numerous sanctions to destroy Moscow on the economic front. However, Russia’s stronghold on the commodities trade in Europe gave it all the ammunition it needed to evade the effects of the sanctions. Furthermore, Russia’s ruble rebound raised questions about the impact of Western sanctions, as well.

Moscow, through its grip on energy exports to Europe, has the capability to choke a huge chunk of industrial production in Europe. Advanced economies like Germany were importing as much as 43% of their total required gas from Russia in 2020. Germany has been gripped by uncertainty amid the upcoming winters since Russia recently halted its gas exports through the Nord Stream pipeline, on the pretext of scheduled maintenance.

European leaders have tried to find alternatives to source their energy needs, but have been largely unsuccessful owing to either infrastructural barriers or Moscow’s smart diplomacy. Conditions are expected to worsen in the upcoming months. To counter the growing threat of energy insecurity in the upcoming winter season, the European leaders have already started formulating plans to ration energy.

The conflict, which is largely triggered by the West, is a well-laid-out plan against Moscow by using Ukraine as a vassal state. The West’s aggression against Russia, using NATO, was what bred the origins of the conflict. However, the situation has been largely beneficial for Moscow, as it is now on a spree of reclaiming its lost Soviet-era glory.

Conditions are deteriorating day by day for Europe, with even the largest economy in Europe — Germany, facing a possible recession. Disrupted supply chains because of the conflict have led to dangerous levels of inflation in the majority of nations. Europe, however, in particular, seems to be the worst hit due to its direct dependence on Russian energy. The civilian populations of European countries are getting increasingly restless amid the exponential increase in commodity prices. Anti-government groups are picking up speed and a situation of civil war has arisen in many European countries.

Europe for long has crafted a policy that relucted to support anything that Russia proposed. Such policies simply adhered to the Western notions of countering the Russian offensive in Ukraine. But unlike the US, Europe by large runs its lives with Russian assistance in the form of natural gas and oil. By kowtowing to its American masters by imposing needless sanctions on Moscow, Europe’s reputation as a reasonable partner with Russia has long eclipsed.

Vladimir Putin, on the other hand, has innumerable strategies to play with. With this current move, Putin has changed the goalpost that may be haunting the European countries for a long time. Make no mistake, the longer the conflict maintains its pace, the longer would Moscow hold leverage over Europe and that is exactly why Putin would hate to see it end now.