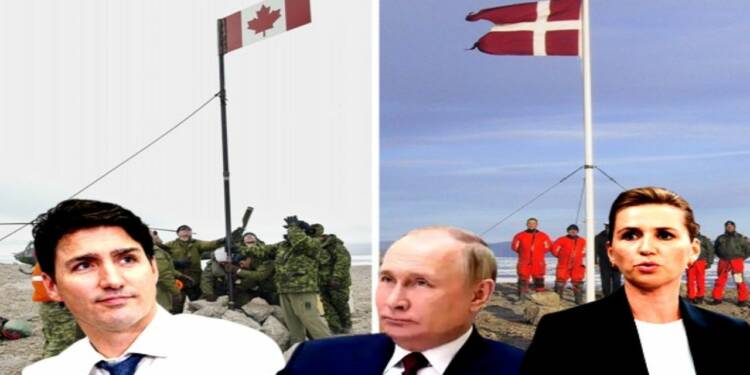 Hans Island is a Canadian and Greenlandic Island in the very centre of the Kennedy Channel of Nares Strait in the high Arctic region. The island has been a bone of contention between Canada and Denmark for over 50 years.

Over time, many analysts and political elites labelled the Hans Island saga as the “friendliest war” ever fought, and the gripping of all is the name ‘Whiskey war’ given to the scuffle that happened in the northwest of Canada.

Hans Island— the bone of Contention

For several years, the dispute was not on anybody’s mind until a Canadian oil company did some research, on and around the island. This happened while an agreement was being explored by the two nations about the marine regions of the Nares Strait where Hans Island was located. The agreement was signed in 1983 and the news of the Dome Petroleum exploration reached Denmark in 1984.

The then Minister for Greenland, Tom Høyem, is said to have flown by helicopter to Hans Island, planting a flag, leaving a bottle of liquor (possibly Schnapps), and providing the following message: Velkommen til den danske ø, meaning “Welcome to the Danish Island”. The Canadians then did the same, removing the flag, and leaving a bottle of Canadian whisky, from which the “good-natured” war takes its name.

Whatever it be, the infight between Canada and Denmark for the rare jewel, that is Hans Island, never made sense, since the island was barren, with no rich minerals or anything of interest unless you are into visiting seabirds.

History documents the island as once a turf of Inuit hunting but contemporary politics has restored the lost sheen of the barren arctic island just for one nation — RUSSIA.

You see, Russia is an enormous country where one-fifth of the country’s landmass is north of the Arctic Circle. In 2020, Moscow made a good friend in Greenland with trade deals ranging from footwear to frozen food items. At first glimpse, it was just a start of a new friendship and no one found any peril in such a deal.

But when things became more global, the US understood the strategic genius behind Russia’s sudden pact with Greenland. Moscow upped the game with a move to use Greenland as an easy conduit to Canada and the Arctic.

Read more: How the Saudi Prince found a useful idiot in Justin Trudeau

Meanwhile, Canada remains militarily bleak. This mediocrity of armed forces was put behind the veil for long as Ottawa’s foreign policy was to ride on the dominance of neighbouring America, which always assured safety. But times have changed, and so did the dominance of the US on the global stage. The Ukraine war gave a sly warning about the emergence of new world order with Russia at the forefront.

Russia has all the riches to go for the Arctic and President Vladimir Putin is strengthening the shackles with his trade pact with Greenland. But, Hans Island stands as a hindrance to Putin’s long ambitions in the Arctic. Getting into Hans Island means cordial talks with Denmark that could pave way for Russian forces’ deployment on the barren island.

However, mending bridges with Denmark will be quite cumbersome for Putin, since Copenhagen is more aligned with the EU, emboldening the fight against Moscow’s intrusive policy in Ukraine.

Even, Canada and Denmark held talks to divide the 1.2 square-kilometre (0.75 square miles) island into two almost equally large parts along a naturally occurring cleft on the rocky outcrop.

But Vladimir Vladimirovich Putin is never bereft of solutions and he did what he usually does. Denmark’s largest energy company Orsted said recently that Russia cut off its gas supply because it refused to pay in roubles.

Denmark has been a net exporter of natural gas for many years, but because its Tyra field in the North Sea is being renovated, the country currently imports about 75% of its gas consumption via Germany. The Tyra field is expected to reopen in mid-2023.

With the winter scare remaining a reality, and Canada accused of sending defected turbines back to Russia, no good chance is in cards for Ottawa to mend ties with Denmark over Hans Island. Europe is yet to single out a proper alternative if Russia shuts down completely its energy transfer through Gazprom. This would leave Denmark with no way but to bow down to Russia’s demands.

Make no mistake, as the plot widens the border disputes won’t see a pragmatic or peaceful end between Canada and Denmark since Moscow’s ambitions in the Arctic is more alive than ever before. A tiny Island northeast of Canada could indeed become its greatest threat in future.

24 Matters of The Heart Quotes to Make Your Day