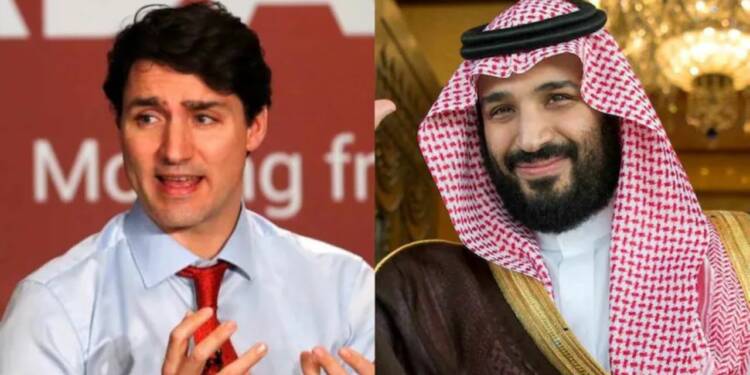 No matter what the situation in Canada is, Prime Minister Justin Trudeau constantly sports a “smiley mask.” This merely helps Trudeau project an upbeat, cheerful appearance and nothing else. But, when it comes to Ottawa’s diplomatic relations with Riyadh, it is crown prince Mohammed bin Salman Al Saud who is smiling, not Trudeau.

The whole fight began in 2018 when Canada criticized the human rights situation in Saudi Arabia.  But the events after that rivalled a classic 90s political thriller. Saudi Arabia declared the Canadian ambassador “persona non grata” and gave him 24 hours to leave the country. The Saudis also called their ambassador back from Canada, suspended “all new business transactions and investments linked with Canada,” and cancelled direct flights to Toronto by Saudi’s state airline.

“Canada will always stand up for the protection of human rights, very much including women’s rights, and freedom of expression around the world.”

This was Canada’s response to the Arab Kingdom’s actions in 2018, which had the wokeness of Trudeau written all over it.

It should be noted that even after the dramatic sacking of ambassadors from Riyadh, the relationship between both Canada and Saudi was cordial but limited. In the shadow of big geopolitical issues, trade deals happened smoothly between Ottawa and Riyadh. And now, the proposed $15 billion sale of light armoured vehicles to Saudi Arabia has brought significant attention – mostly negative – to Canada’s partnership with the Arabian Peninsula kingdom.

Economic relations continue to rebound with around $4.6-billion in trade in 2021 and this sudden jump from being a strong advocate of human rights to supporting the same old foe in Saudi has perplexed many within Canada.

Read more: Saudi and Iran were close to a temporary peace in Yemen. One move by the US and the fighting shifted to Iraq

The New Democratic Party (NDP), an ally of Justin Trudeau’s liberal party expressed its displeasure with the government’s move.

There have been allegations that Canadian-made military equipment was being used in the war in Yemen. In March, the UN called the war in Yemen a “chronic emergency,” with 19 million people facing hunger.

You see, it is a general rule that the Canadian government views everything that is happening in the world through a US-sponsored lens. Before getting into the Oval Office, Joe Biden wanted to make Saudi Arabia a pariah state. The narrative of the US president took a bizarre turn after the Ukraine war of February. Biden’s recent visit to Riyadh itself proves to be the beginning of an unusual friendship between Washington and Riyadh.

Ottawa views its relationship with Saudi Arabia in large part through the prism of its ties with the U.S. Its cost-benefit calculations are, therefore, similar to Washington’s.

Well, it was the previous conservative government under Stephen Harper who pushed for closer ties with Saudi Arabia under Canada’s global market action plan. But the emergence of Justin Trudeau put all sorts of roadblocks to this deal, citing Saudi Arabia’s abysmal human rights record.

And the irony is that the same, Trudeau-led government is now one of Saudi Arabia’s leading trade partners, with all of the Canada-sponsored military weapons helping Saudi clinch the big win against Iran-backed Houthi rebels in Yemen. To put it in other words, Trudeau is indeed a useful idiot for MBS.