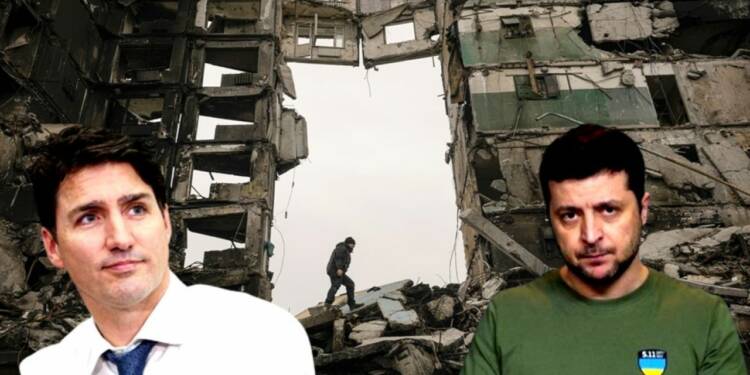 Canadian Prime Minister Justin Trudeau is not just falling back on his approval ratings. The Zelensky -Trudeau infamous fling witnessed Canada showing unilateral support to Ukraine in its war against Russia. However, very much like his ratings, Trudeau has fallen back on his promises too.

US President Joe Biden and his allies in Canada and Europe have tried to prolong the conflict and use Ukraine as a proxy in their war against Russia. The Ukrainian President, Zelensky’s ambitions, owing to the newfound support from leading powers, have led to the loss of thousands of lives.

Zelensky has been the subject of constant support from Canada since the start of the war. Ottawa’s allegiance to Washington is a major driving force that has always shaped Canadian foreign policy. As a result, Biden has been instructing Ottawa since the beginning of the war to step up criticism against Moscow and ramp up its capabilities to help Ukraine amid the ongoing war.

However, it looks like Zelensky assumes that all issues that do not concern him are unworthy of attention. While the clown President is busy getting a Vogue photoshoot with his wife, leaders in the United Kingdom, Canada, Italy, and the United States have lost popularity as a result of their support for Ukraine.

Read More: Every conservative province in Canada to go broke, thanks to Trudeau

Ottawa comes to its senses

You see, Canada’s Ukrainian embassy was abandoned in February as the security situation deteriorated within the country. The Canadian embassy in Kyiv is still closed, nearly three months after Trudeau made a surprise visit to Kyiv and promised to formally reopen it.

“This flag came down Feb. 13, and we’re really glad to be raising it again above the Canadian embassy,”  Trudeau said during the visit.

According to reports, Poland and other nearby nations would continue to provide consular and immigration services amid Canada’s falling diplomatic presence in the country. The Canadian Ambassador and his staff are also reportedly working from off-site locations in Kyiv due to security concerns.

Make no mistake, the bells of a growing rift between Zelensky and Trudeau can be heard, with both parties seeming to refuse to coordinate among themselves. Trudeau seems like he would soon leave Zelensky’s side, and his “betrayal” possibly stems from Zelensky’s hypocritical actions against the needs of other nations.

The Nord Stream 1 pipeline, which is a major supplier of Russian gas to Germany and other European nations, went under a ten-day maintenance period earlier this month. The turbines from the pipelines were undergoing maintenance at a Canadian site owned by German industrial giant Siemens.

To be clear, the pipeline is very significant for the energy security of Germany and Europe, and the absence of its turbines could have been disastrous for the importing European nations, especially in light of the approaching winter.

As a result, bowing down to international pressure, Canada agreed to deliver to Germany the turbines needed to maintain the Nord Stream 1 gas pipeline, despite sanctions in place against Russia.

But this didn’t bode well for Zelensky. In the aftermath of the delivery, Ukraine summoned its Canadian ambassador over Ottawa’s decision to return to Germany gas turbines needed to maintain the Nord Stream 1 pipeline.

“The Ministry of Foreign Affairs had to summon Canada’s envoy to our country due to an absolutely unacceptable exception to the sanctions regime against Russia,” Zelensky said in his daily address on Telegram.

Zelensky is indeed living in a cuckoo land where he perceives the grave issues of his own allies as insignificant. The volumes of gas flowing through the pipe have already been cut down exponentially, leading to high inflation in many countries in Europe.

If the world had heeded the so-called advice of Zelensky, the people in Germany would have frozen to death once winter came. The gore negligence of the problems of his allies, and in turn blaming Ottawa, has triggered Trudeau to go on the offensive against the clown president. Don’t be fooled; the immense pressure from the European Union made Trudeau leave his longtime bonhomie with Zelensky.

All in all, Zelensky’s self-serving goals are not benefiting the Ukrainian people in any way. The words of William Cowper hold true for Zelensky. “Glory, built on selfish principles, is shame and guilt.”