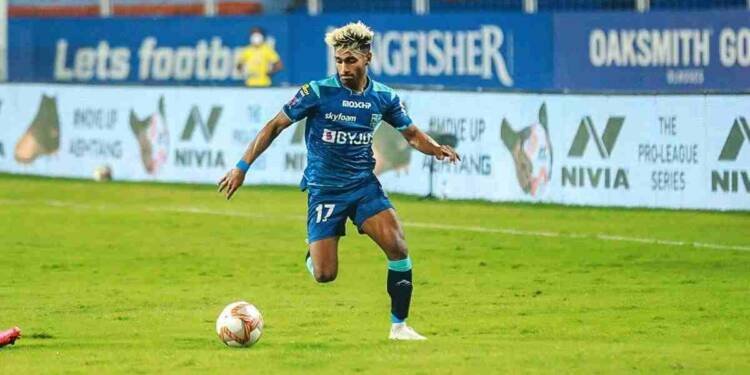 Rahul Kannoly Praveen, also known as Rahul K P and born on March 16, 2000, is an Indian professional footballer who currently plays as a winger or striker for Kerala Blasters in the Indian Super League. He has participated in numerous youth competitions, including the 2017 FIFA U-17 World Cup, as a member of the Indian national squad. In this article we are going to talk about the biography, career, notable works, and family of Rahul Kannoly Praveen so read the article till the end.

Rahul Kannoly Praveen is a famous footballer this biography article is incomplete without talking about his club performance and international matches.

Rahul was appointed in May 2021 as the first South Indian brand ambassador of MyFitness, the country’s first peanut butter brand to receive FDA registration in the United States.

He was chosen for the AIFF Elite Academy, which was preparing for the 2017 FIFA U-17 World Cup to be held in India, after his performance in the competition. Rahul was chosen to play for the Indian Arrows, an All-India Football Federation-owned side made up of U-20 athletes, after the competition to offer them playing time.

In the season opener for the Arrow against Chennai City, he made his team’s professional debut. He began the game and participated throughout it, which Indian Arrows won 3-0.

Rahul Kannoly Praveen scored his first professional goal against Shillong Lajong a month later, on December 26. His 91st-minute goal sealed a 3-0 victory for the Arrows.

The following game, on December 29, against Mohun Bagan, saw him score once more for the team. This time, the Indian Arrows’ goal in the 33rd minute was the equalizer as the game ended in a 1-1 draw. He scored against Mumbai City FC in the qualification stage to become the first Indian player to score in the 2019 Indian Super Cup.

Rahul primarily plays as a left-winger but can also switch to a right-winger. He has a right foot by nature and is renowned for his quickness, explosiveness, dribbling, and work ethic. He has also played many games as a striker.

Rahul, a Thrissur, Kerala native, first played football for the Thrissur district under-14 squad before switching to the Kerala football team in the same age division. In the under-14 division of the national tournament played in Kolkata in 2013, he led the field in goals scored.

He is quite popular for his lavish lifestyle on Instagram. He has posted many pictures of spending time in lavish locations. His official handle is rahulkp_r7_ and has over 400k followers so far.

Rahul Kannoly Praveen joined Kerala Blasters, an Indian Super League team, on March 19, 2019. On October 24, 2019, as Kerala fell 1-0 to Mumbai City, he made his debut by coming off the bench. As Kerala blasters lost 2-1 to Hyderabad on November 22, he scored his first competitive goal for the team in the 34th minute and moved into second place among the club’s youngest goal scorers, behind only Deependra Negi.

Sahal provided the assistance. Rahul made a total of eight appearances during the season despite missing most of them due to injury.

On February 23, 2022, he returned to the field to play against Hyderabad, where he contributed to the Blasters’ lone goal in a 2-1 loss to the Nizams. In the final game of the 2021–22 ISL season against Hyderabad on March 20, Rahul scored his first goal of the year, giving the Blasters the lead at the time.

However, the Blasters ultimately lost in a penalty shootout as Hyderabad tied the score in the closing seconds of the normal 90 minutes.

We hope this biography article of Rahul Kannoly Praveen will be helpful for you to understand his journey and works.