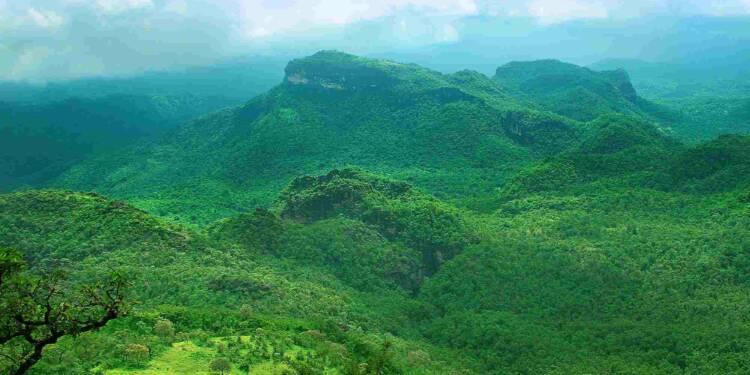 The Satpura mountain range extends from west to east in the form of Rajpipla hill, Mahadev hill and Maikal range between the rift valleys of Narmada and Tapti. In the east it extends up to the Chota Nagpur Plateau. This mountain range is a block mountain, which is mainly made of granite and basalt rocks. The highest peak of this mountain range is Dhupgarh 1350 m, which is situated on the Mahadev mountain.

It is a great mountain range situated to the south of Vindhyachal. The word ‘Satpura’ is said to be a corruption of ‘Saptaputra’. Some scholars are of the opinion that there are seven categories of Satpura mountain, due to which it was given the title of ‘Saptaputra’. In the Hindu religious mythological epic ‘Mahabharata’, this mountain has been described between Narmada and Tapti.

The Satpura hilly region covers 900 km in the states of Madhya Pradesh and Maharashtra. It is the widest part of peninsular India. The highest peak of Maikal hill is Amarkantak 1036 meters, from where Narmada and Son rivers originate. The average height of the Satpura range is 900 metres. The name of this mountain range means ‘seven rings’, acts as a water-divider between the rivers Narmada (North) and Tapti (South).

It is widely forested and isolated from the other plateaus of the country, its forests containing the prized teak trees in the west. Some cultivation is done in the upper Wainganga and Pench valleys of the Mahadev hills and shifting cultivation is practiced by the Gond tribes in the upper hills.

Places of Attraction in Satpura Range


The Satpura range is home to a plethora of national parks, hill stations, reserves and towns, which attract a large number of tourists every year.

Pachmarhi: Also known as ‘Queen of Satpura’. Pachmarhi is a hill station and a tourist destination for trekking, fishing and adventure activities. It has many attractions like exotic wildlife, rich biosphere reserve, many waterfalls, rivers and rocky terrains.

Amarkantak: Also known as Tirtharaja or the King of Pilgrimages, Amarkantak is a pilgrimage town with a unique natural heritage area. It is the meeting point of the Vindhya and Satpura ranges, where the Maikal Hills are completely situated. This is where the Narmada, Son and Johila rivers originate.

Toranmal: Famous for its Gorakhnath Temple, it is a pilgrimage site attended by thousands of devotees on Mahashivratri.