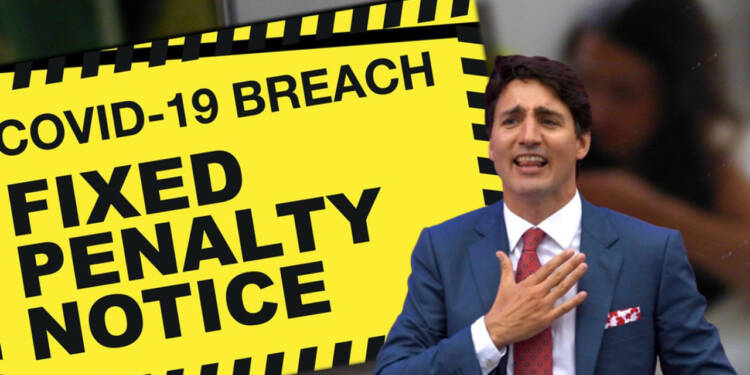 The dog and pony show over the Covid restrictions will never end in Canada. Each day passes with new liberal doings from the Prime Minister proving his critics right that he is a complete fanatic. A Twitter user from Canada provided certain details that are veritable enough to bring into light the cruel disregard that Justin Trudeau-led government has for his people.

Left Canada in November of 2020 to escape Covid mania and returned last night via the land border with a valid passport. Was greeted with a request for a PCR test and a demand I download the ArriveCan app, both of which I refused.

The details shared in the cyber domain show a hefty fine of $6200 imposed on the user for refusing to download the dubious ArriveCAN app.

ArriveCAN is a mandatory travel app in Canada that should be used by any traveller wishing to enter the North American country. The app was put to use to track down the rising cases of COVID.

But a deep look down into the details of the app will give the necessary shrills to Canadians. There are serious privacy issues raised by the massive amounts of personal data that are collected and stored through the ArriveCAN app.

It was only recently that Canada’s privacy commissioner launched an investigation into the controversial ArriveCAN app amid complaints that the app is collecting travellers’ personal information.

According to the Twitter user, he left Canada in November of 2020 to escape Covid mania and returned recently via the land border with a valid passport. But he was greeted into the Trudeau land with a request for a PCR test and a demand that he download the ArriveCan app, both of which the user refused. Then happened the “precious gift” from the government in the form of a fine of “just $6200”.

If Trudeau’s strict imposing of covid restrictions was an 8 on the scale of disaster, this incident is a sure 10.

It has been two years since the spread of the China virus and still, Canada is hell-bent on making people’s life uncomfortable with restrictions that are simply unjust.

In the City of Hamilton, many restaurants were charged four times for flouting pandemic precautions under the Reopening Ontario Act. Many say the fines are unjust.

Exclusive data from the Ministry of the Attorney General offers a breakdown of paid and unpaid fines under the Reopening Ontario Act (ROA) with Hamilton, Greater Sudbury, and Thunder Bay waiting for more money through defaulted fines than they have received through paid fines.

Trudeau is thriving a business with the collection of hefty fines for breakage of the so-called covid protocols. The burden is all on the commoners of Canada to bear. It has turned out to be an inescapable reality for them. The freedom that the Canadians cherished has become the luxury of the past.

This revelation of $6200 fine has opened floodgates of criticism at Trudeau. But don’t expect any better from the prime minister since he has quietly mastered the skill of ignorance like no other. On another note, while the people of Canada end up getting fined for no reason of theirs, Justin Trudeau is flying off to costa Rica to experience the Latin heat and to have a small sabbatical from the crisis at home.