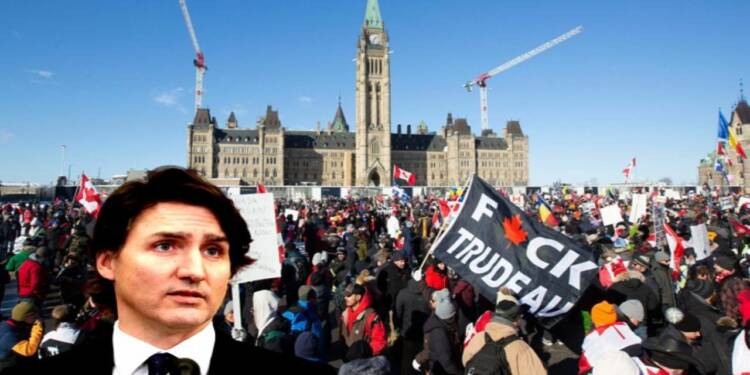 The ‘Crime’ Minister of Canada never gets tired of ruining the lives of his own countrymen.  Canadians have now got attuned to getting frustrated with their liberal leaders’ draconian policies. There’s always an addition to Trudeau’s never-ending list of stupidities. One such stupidity was the introduction of a 30% emissions reduction target for fertiliser use in the agricultural industry. But, that seems to have backfired now.

Trudeau has been pushing for reforms and plans to reduce nitrous oxide emissions, a by-product of nitrogen-based fertilisers. According to the agricultural sector, the move will diminish crop output. But, in order to garner support from wokes around the globe, Trudeau wants to portray himself as a progressive leader, even if it means putting the lives of his own citizens at peril.

You see, this contentious law comes at a time when the world is already reeling under a severe food security crisis. Liberals in Canada seem to have lost their minds. The Trudeau government, under the pretext of climate policy, is reportedly going to force farmers to use less fertiliser at a time when inflation is rising and food poverty is growing.

Enough is enough! Now, the Prairies are up in arms against Trudeau. The three Prairie provinces in Canada are in revolt now. The Premiers of Alberta, Saskatchewan, and Manitoba have unanimously rejected Trudeau’s proposed fertiliser reduction scheme.

In a letter to Justin Trudeau, Manitoba Premier Heather Stefanson had this to say about the proposed policy: “Your government’s national emission reduction targets are being brought forward at the worst possible time. They will negatively impact producer yields, which will mean higher grocery bills and less food security for families. This cannot be another blow to the affordability of raising a family in Manitoba.”

Even, Saskatchewan Premier Scott Moe rejected the policy, saying “Thanks, but no thanks for Saskatchewan.”

“The same federal government who alienated our oil and gas industry is now putting global food security at risk by attacking the hard-working agriculture producers across western Canada with an arbitrary goal to reduce fertiliser usage,” wrote Moe in a tweet.

Alberta Premier Jason Kenney has also outright rejected Trudeau’s fertiliser reduction scheme, saying, “The Trudeau Liberal government has been hammering Canada’s largest industry, oil and gas, for years, and now they’re moving to a new target, Canadian farmers, with their proposal to reduce by 30% a key component of the fertilisers that are used by farmers right across Canada and around the world to get the best yields they can.”

Well, other negative consequences of the move will transpire job losses in the agricultural and the food processing sector. Make no mistake, it will hurt the livelihoods of farmers across Canada.

Not to mention, the people of Canada were already vexed by Trudeau’s alienation of  Canada’s largest industry of oil and gas. Wasn’t that enough? But no, Trudeau has something else in store for them. He is all set to hammer the country’s agriculture industry.

But, worry not Canadians, Prairie Provinces have come to your rescue. They have repudiated the law by calling it draconian.  Now, some of you might ask, how is this going to stop the authoritarian Trudeau? Well, he has to. You see,  the Prairies are the breadbasket of Canada, and if the provinces revolt against Trudeau’s fertiliser reduction scheme, there is certainly no way in which the law can be enforced. Therefore, he will have to abandon his irrational fertiliser reduction scheme.

Now, this might send a ray of hope to all the perturbed Canadians. Believe us, the Crime Minister will give up! Canadians have had enough of their liberal-fanatic PM. It’s only a matter of time before Trudeau is thrown out of power.