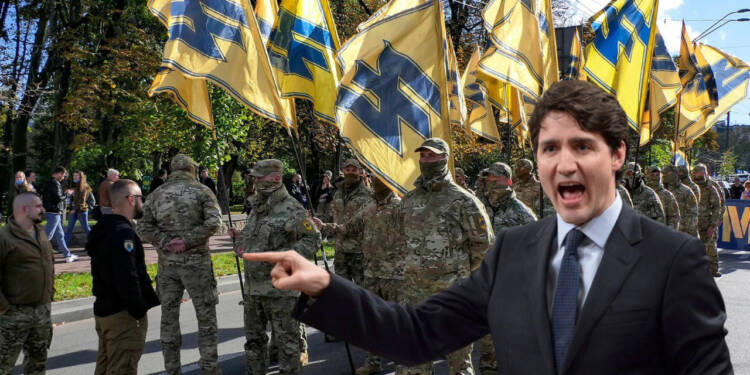 Justin Trudeau hogs the limelight wherever he goes. One cannot go through online or offline media without stumbling upon him. But we don’t hear much about his closest aids. What about, for instance, the deputy PM of Canada, Chrystia Freeland, the first woman to hold the finance portfolio? Why is she so obscure? And why are we talking about her now?

Chrystia Freeland has an impressive resume: editorial position at prestigious newspapers, M.D. of Reuters and eventually becoming a part of Trudeau’s cabinet during a ‘liberal’ 2015. Her crowning achievement came in 2019 when she was appointed deputy PM in the Trudeau regime.

Canada’s Deputy PM Chrystia Freeland has now deleted her earlier post where she’s holding a banner with the colours of a far-right group and replaced it with one where she isn’t. pic.twitter.com/UdxtmaCgJi

Freeland’s response to the Russia-Ukraine war can be described as ‘unhinged’ and even that would be an understatement. People thought it was natural for her to sympathize with Ukraine because her mother was Ukranian.But her involvement in ukraine mostly circled around radical elements that gave rise to suspicions of her being a closet neo-nazi.

These suspicions gained further traction when a she was seen holding a scarf bearing the colors associated with a far-right Ukranian para-military group in a photograph dated march 2022. She also supported Canadian military’s infamous training of the neo- nazi group of Azov battalion in Ukraine. Nobody questioned it and no big media evoked any interest to cover that news.

DEPUTY PM IS A NAZI

The story of Michael Chomiak Michael put the final nail in the coffin. Here is a brief sketch of the deputy PM’s maternal grandfather…
Michael Chomiak (1905-1984) held the influential position of editor-in-chief for the Nazi’s leading
Ukrainian-language newspaper, Krakivs’ki visti (Krakow News). As the flagship Nazi propaganda mouthpiece for Ukrainians all across Greater Germany and occupied Europe. Chomiak penned articles and guided many to spout antisemitic rants that saw Ukrainians isolating seven million Jews from their land. It was the Soviets that eventually repelled the Nazi military and chased them back to Germany… The deputy PM has got quite the pedigree.

There is no need to connect the dots in this case for each one is sufficient in itself. One can logically conclude that Chrystia freeland is a Nazi and that her Grandfather would be proud to see that his legacy lives on. As for Justin Trudeau he can relax for a while. Take a break from the limelight. There is someone more sinister in town.