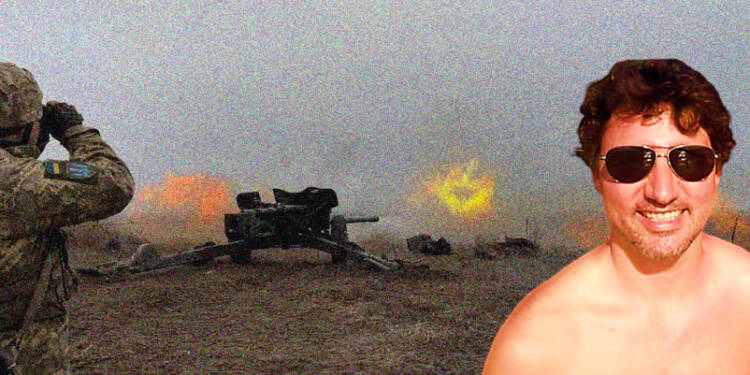 What is ‘Kakistocracy’? Don’t go confused since you have Canada ,and the happenings in the great white north can give you the exact answer.

You see, the ‘Crime Minister of Canada’ never shies away from taking the most illegal steps in the world. From making the Canadian farms barren to demolishing Canada’s healthcare and aviation industry, Mr. Trudeau is now all set to make the lives of the soldiers miserable.

A NEEDLESS MOVE FROM TRUDEAU

Canadian Forces special operations members are training Ukrainians on the ground in the war-torn country. Well, a previous version of a somewhat similar story said Canadian troops training the Ukrainian army in the UK, but alas, it was found to be a fake one.

The truth is now right here. Justin Trudeau is preparing his ‘brave soldiers’ to get slaughtered in the Ukraine war. Elite Canadian operators from the Canadian Special Operations Command are training Ukrainians on the ground in Kyiv, multiple sources told Global News.

Now, the liberal mind in you may be thinking that Trudeau is wearing his humanitarian robe trying to assist the war-torn country. But the reality is hidden in Trudeau’s persona. While other countries are dis-engaging themselves from the aggressive war, Canada just wants to play the ‘good boy’ in front of NATO.

Despite, Ukraine’s repeated pleading for Western assistance, Washington never braved sending their troops to Kyiv. The West has been aiding the war-torn country with military equipment from day one, but the US shied away from deploying their mighty armed force in Kyiv because they valued their soldiers’ lives and feared Putin’s military might.

The Biden administration has consistently ruled out the deployment of US troops. “Let me say it again: Our forces are not — and will not — be engaged in the conflict with Russia in Ukraine,” the president has time and again made that clear.

This is where the ‘good boy’ comes into the scene. Canada is making headlines these days by training the Neo-Nazi armed groups in Ukraine. Why Mr. Trudeau? Why do you like to get so much media coverage? And that too at the expense of your country’s poor soldiers. How strange!

You see, a top Canadian soldier Gen. Wayne Eyre when asked about the situation, denied passing on any information regarding the matter. He says he won’t confirm or deny that Canadian troops are deployed on the ground in the war-torn country.

When asked about the reports, Eyre said the military is “never going to talk about discreet or sensitive special operations or confirm or deny them, calling the media reports “disappointing” and speculative.

“If it was true, it would put our troops at risk. And why would anyone deliberately want to put Canadian troops at risk?” Eyre said.

“The other aspect we need to think about is speculation in the media feeds Russian disinformation as well,” Eyre said. “We’re seeing, as the character of war evolves … disinformation is itself becoming a weapon. So, we just need to be very, very cognizant of that aspect as well.”

Perhaps, the General is concerned about the Canadian military. He is tight-lipped only for the single fact that, he does not want to feed the Russian military with information regarding Canadian troops location in Ukraine.

Global powers including US and UK are distancing away from supporting Ukraine when it comes to armed forced deployment. Turkey is sending Bayrakhtar to Ukraine, US is sending HIMARS, and many other countries that favours Ukraine are assisting them militarily.

But sadly, Canada is military-less and they can’t help but only watch what unfolds in eastern Europe. But Trudeau is such a progressive champ who gives zero concern for the lives of the Canadian armed forces and goes on doing things just to impress the US led military bloc.

Just to be in the good books of NATO, the prime minister is playing with the lives of Canadian soldiers by pushing them into the turbulent ground of Ukraine while the Liberal champ goes enjoying a good week’s rest in Costa Rica.