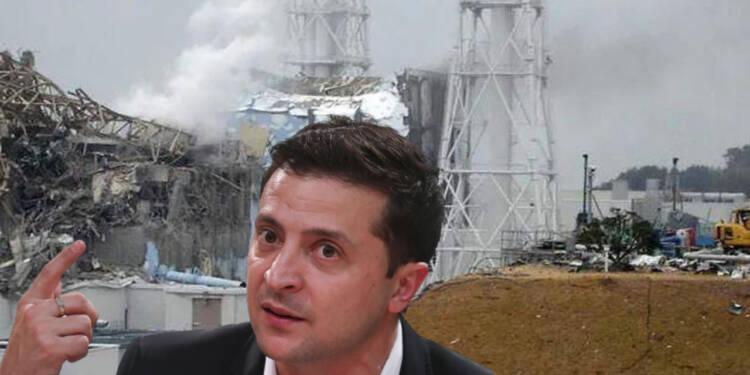 On 26 April 1986, a horrendous explosion took place in the city of Prypyat, Ukraine. This disaster was popularly known as the ‘Chernobyl disaster’. The blast was so powerful that it shook all of Europe and alerted the UN to a potential nuclear disaster.

According to estimates, the disaster took the lives of more than 200 people. And it was all because of one thing: falsehoods. To be honest, no one knows whether the total number of fatalities was 200 or 93,000 at the time since the officials kept lying to cover up the true cost of the tragedy.

36 years later, the Ukrainian President is looking to repeat the same.

More than 150 days of the Russia-Ukraine war have passed. However, the war is in total deadlock mode now. In the early days of the war, Russia took control of the Zaporizhzhia nuclear plant and the nearby cities of Enerhodar and Berdyansk. Firstly, Ukraine denied the capturing of the Zaporizhzhia plant by Russians but eventually confirmed the same. However, the plant’s operations continued normally.

But recently, renewed shelling on the nuclear plant damaged three radiation sensors and disrupted the plant’s regular operations by wounding a worker. Since then, Russia and Ukraine are trying their best to throw each other under the bus.

Ukrainian President Volodymyr Zelensky, in his nationwide address, pitched that Russia is waging “nuclear terror” by attacking the nuclear plant. The region’s Russian-installed government, on the other hand, replied with charges that Ukrainian forces attacked the location with numerous rocket launchers, damaging administrative buildings, and an area adjacent to a storage facility.

Furthermore, Russian Embassy in Washington emphasized that Ukraine damaged two high-voltage power lines and a water pipeline. So, the situation is pretty tense as of now.

Being honest is always good and fruitful.  Zelensky, on the other hand, has the exact opposite view. He is attempting to reclaim the lost sympathy and has been acting in this manner in order to stay in the good graces of the liberal world order.

On Cross Hairs of the Human Right watches

Believe it or not, most of the ‘so-called Human rights watches’ have started to wake up to the reality that Ukraine is hiding some very dark secrets.

Immediately after the attack on Zaporizhzhia, UN Secretary-General Antonio Guterres asked Ukraine to allow international inspectors to access the Zaporizhzhia nuclear plant. But, guess what?  Ukraine has kept a total Schum over the issue.

Despite the fact that the plant is under Russian siege, Ukraine continues to operate it normally.

Ukraine has a really dark history of committing war crimes. Just a few days ago, Ukraine attacked Olenivka detention facility in Donbas to kill Azov fighters as they had the potential to spill out the dark secrets.

A few days ago, a UN report accused Ukraine of committing war crimes by using innocent patients as human shields to avoid Russian military invasion. But, that’s just the tip of the iceberg. Zelensky and his men have committed countless unpardonable sins on the battlefield.

Furthermore, several independent media reports made it clear to the world that Ukraine has committed major war crimes in Donbas and Luhansk regions. The voice was echoed by reports of Amnesty International which eventually were deleted to hide the truth from the world.

Zelensky has launched a brand-new “PR” campaign to win over the public’s sympathy after realizing that he is on the back foot.

Ukraine has no limits when it comes to lying, but Mr. President please realize that you’re not dealing with food grains now, you are playing with a huge ‘Nuclear Plant’. Your constant lies could drag the world back to the Chornobyl disaster. And if that happens, there will be nothing but agony and a heap of dead bodies; this catastrophe would be the most heinous fault of your presidency.