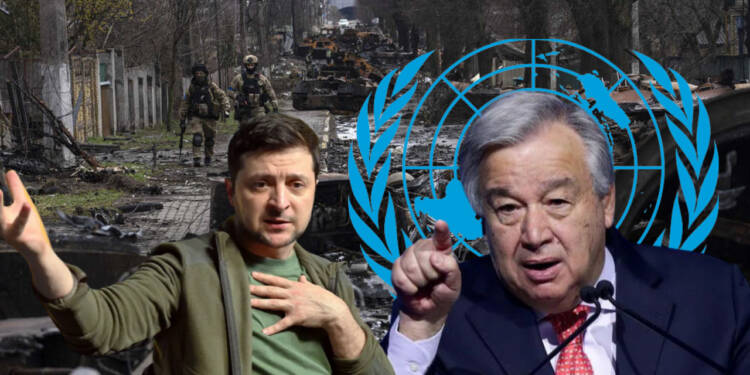 Ukraine has been caught red-handedly after they purposely used a nursing home as a base for operations, perfectly knowing that they would be placing the residents and patients of the nursing house in grave danger. The strike on the nursing home close to the village of Stara Krasnyanka stood out for its intensity since the beginning of the war.  The Ukrainian government blamed Moscow, saying it carried out a horrific and unprovoked strike that resulted in the deaths of more than 50 citizens.

However, a recent UN research concluded that Ukraine’s armed forces were the ones who provoked the violence at the care facility in Stara Krasnyanka. A nursing facility was literally turned into a battlefield when Ukrainian forces set up a base there a few days prior to the March 11 raid. The civilian death toll is estimated to be around 50 but exact figures are not available.

The report by the office of the U.N.’s High Commissioner for Human Rights said that the conflict at the nursing home in Stara Krasnyanka serves as a symbol of the human rights office’s worries about the probable use of “human shields” to obstruct armed intervention in particular locations. Kyiv has been lusting for the inflow of billions of dollars worth of aid and weapons to further its aggression.

In order to legitimate the advance, Kyiv must look strong and therefore it did not shy away from using its own citizens as human shields. Ukraine should follow the humanitarian guidelines, the failure of the Ukrainian forces to remove the patients and personnel from the structure has breached the laws of military conflict.

“The bottom-line rule is that civilians cannot intentionally be targeted. Period. For whatever reason,” David Crane, a former U.S. Defense Department official and a veteran of numerous international war crime investigations said. “The Ukrainians placed those people in a situation which was a killing zone. And you can’t do that.”

Read More: Has Zelensky appointed Hamas to run its military operations? Its modus operandi suggests so

Kyiv Weaving lies from day one

In a statement on March 23, Victoria Serdyukova, the Luhansk People’s Republic’s human rights commissioner, claimed that Ukrainian forces were to blame for the casualties. She said that Ukrainians had kidnapped the occupants of the nursing home and that many of them had been burned alive in a fire caused by Ukrainian forces as they fled.

Read More: Did Ukraine use innocent civilians as human shield against Russia in the name of evacuation?

The strategic location of the nursing home made the Ukrainian “militants” take position without feeling the need to evacuate the civilian occupants. The managers of the institution frequently asked the local authorities to relocate the occupants. However, the  Ukrainian forces allegedly mined the area and closed access roads, making an escape impossible, according to a UN report.

The Ukrainian defences have proved to have followed the motto of “Everything is fair in war” too seriously. Risking the lives of innocent civilian citizens in any kind of war is outright wrong both legally and ethically. Recent reports about the Ukrainian army indulging in unethical conduct have shed a light on the reality of Zelensky and western powers should take a note and rethink the aid they have been sending.