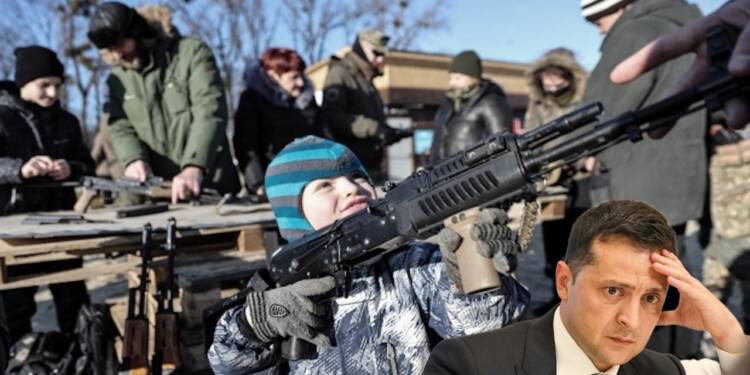 Ukraine is being portrayed as an innocent victim of the war that Russia is waging against it. Definitely, Ukraine is a victim. Russia is a much larger and superior force, and will eventually vanquish Ukraine’s defenses. Already, the Eastern European country has faced major losses in terms of weapon systems and armed fighters and moving forward, Kyiv will find it incredibly difficult to keep fighting Russia. Most of those that are fighting Russian forces are Ukrainian conscripts. So, Kyiv is naturally getting desperate. Not only is the regime of Volodymyr Zelensky desperate, but so are Western powers puppeteering the Ukrainian president.

The United States under Joe Biden, and all of its NATO allies, have invested several billion dollars to ensure that Ukraine keeps fighting to its last man standing. Ukraine is adamant it will not surrender. However, who is suffering due to such obstinacy on the part of Zelensky and his masters? The innocent people of Ukraine, who are beginning to hate their country and its armed forces due to what they are being put through.

Ukrainians Being Used as Human Shields

On Monday, German publication Der Spiegel published a three-minute video of the evacuation of civilians from the Azovstal steel plant in Mariupol. Natalia Usmanova, who was employed at the plant before the war started and had sought protection there with her children and her husband exposed Ukraine’s armed forces for using civilians trapped within the plant as human shields and for holding innocent people hostage.

The Azovstal steel plant has a heavy concentration of Azov militants currently holed up in its premises spanning over 10 sq. km. In the video that has now been taken down by Der Spiegel, Usmanova said, “They (Ukrainian soldiers and Azov fighters) kept us in the bunker. They hid behind the fact that they are supposedly concerned about our safety. They shouted at us (when we tried to escape) and said go back to the bunker!”

Ukraine is now trying to suppress such information from being widely consumed by people around the world. Ukraine is surviving right now by pretending to be the innocent one, that is at no fault and is simply a victim of Vladimir Putin’s madness.

Not So Innocent After All

Remember the hue and cry which was given rise to after Russia allegedly bombed a maternity hospital and drama theatre in Mariupol? Well, when it comes to the maternity hospital, eyewitnesses and pregnant women have themselves disclosed that Ukrainian soldiers used the hospital as a combat base while holding these civilians as human shields against Russian forces.

Similarly, in the case of the Mariupol drama theatre, a 17-year-old female survivor of the bombing told the Abkhazian Network News Agency that she eye-witnessed Azov soldiers hiding themselves behind civilian hostages in the building.

Read more: How Ukraine lost the narrative war after being the darling of the world for good 45 days

There is ample evidence to suggest that Ukraine has been using civilians as human shields across the country, especially in Mariupol. The main fighting force of Ukraine in Mariupol has been the Azov Battalion, which is known to have right-wing extremist inclinations. The force also has a proven track record when it comes to brazen human rights violations and employing child soldiers. Yet, Ukraine’s government treats the Azov Battalion like royalty.

The fact that Ukraine has been using civilians as human shields should make the world realize that Kyiv is effectuating a much more nefarious agenda against its own people under the garb of fighting Russia. For its atrocities, Ukraine must be held responsible immediately.