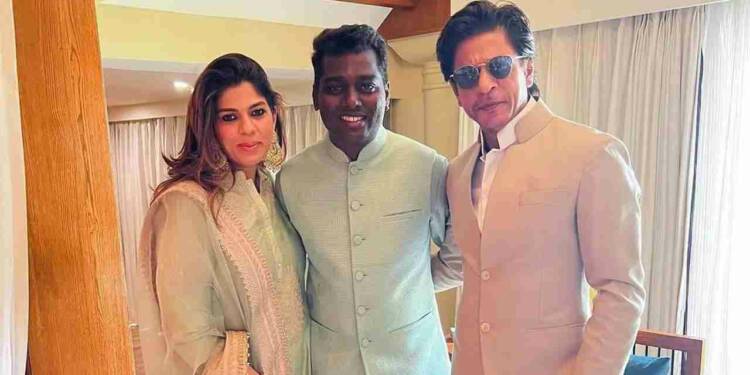 In Tamil cinema, Atlee Kumar is an Indian director and screenwriter. His most well-known work is Raja Rani (2013), a Fox Star Studios production for which he won the Vijay Award for Best Debut Director. In this article we are going to talk about the biography, career, notable works, films and family of Atlee Kumar so read the article till the end.

His subsequent projects, Theri, Mersal, and Bigil, all-starred actor Vijay, saw him take on the roles of director, screenwriter, and writer.

He will make his Hindi debut in the upcoming Shah Rukh Khan movie Jawan, which is slated for release in 2023. Atlee is very popular on Instagram and has over a million followers.

Atlee Kumar is a famous film director and screenwriter and he worked for so many movies, this biography article is incomplete without talking about his films. So here you will gain info about his films and projects.

His debut movie as an assistant director was Enthiran for filmmaker S. Shankar.  He also worked in and Nanban with the filmmaker.

With Raja Rani, Atlee Kumar made his filmmaking debut in 2013. The romantic comedy starring Arya, Jai, Nayanthara, Nazriya Nazim, and Sathyaraj was made by Fox Star Studios and AR Murugadoss.

Bigil, the third movie that Kumar and Vijay collaborated on, was released on Diwali 2019 and was a commercial success, earning more than Rs 300 Crore at the box office and ranking first among Tamil films for the year.

On November 24, 2020, Andhaghaaram, his next movie with Arjun Das and Vinoth Kishan, was made available on Netflix. In the next movie Jawan, which also stars Nayanthara and Shah Rukh Khan, he will make his Bollywood directing debut.

The first movie Atlee Kumar co-produced with Fox Star Studios was Sangili Bungili Kadhava Thorae, a horror comedy written and directed by Ike Radha and starring Jiiva, Sridivya, and Soori. He established his own production company, A for Apple Production.

Krishna Priya Mohan is a well-known Tamil actress, model, TV program host, media personality, businesswoman, and social media celebrity from India. She was born on April 26, 1990. She became well-known for her outstanding performance in numerous films and TV shows. She’s collaborated with a lot of well-known actors.

What is the salary of director Atlee?

Atlee Kumar has signed on for his next movie with SRK’s Red Chillies Entertainment and has been offered a staggering remuneration of 30 crore rupees, making him one of the highest-paid directors in Indian film.

Why is Atlee so famous?

With Vijay, Atlee is known for starring in the hit movies “Theri,” “Mersal,” and “Bigil.” The talented director has consistently portrayed Vijay in the way that every fan wants to see him, and his flawless balancing of emotions contributed to the success of all three movies.

We hope this biography article of Atlee Kumar will be helpful for you to understand his journey and works.

Big media is breathing its last in Canada