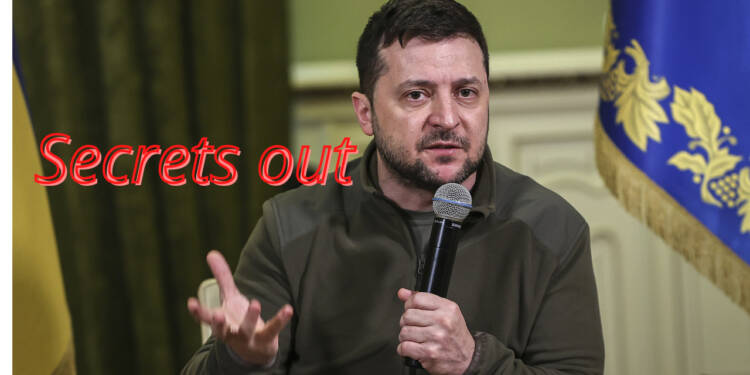 Liberal Media has given tremendous popularity to Ukrainian President Volodymyr Zelensky and his top officials in the aftermath of the Ukraine war. The Ukrainian authorities appeared to be desperate for attention.

But, it seems like the lust for attention among Ukrainian officials has started to become a thorn for Zelensky, he is now literally warning his own officials to stop spilling beans or else they will be damned.

Volodymyr Zelenskyy, who is under intense pressure as he continues his fight against Russia, has issued a caution to government personnel not to reveal ‘sensitive secrets’ for social media attention.

Reportedly, Zelensky has warned Ukrainian authorities not to reveal Kiev’s military activities against Russia, and has stated that disclosing any “concrete details” regarding defence plans is “frankly irresponsible.”.

The exact words of Zelensky!

Zelensky irked his concern while addressing the nation in a televised address. The Ukrainian President stressed: “Today I would like to point out an important thing for all representatives of the state and local authorities, the military sphere and other persons who comment on the events at the front, the defense plan of the command, the preparation of specific operations, etc.”

He furthermore added: “ The general rule is simple: war is definitely not the time for vanity and loud statements. The less concrete details you give about our defense plans, the better it will be for the implementation of those defense plans. “If you want to leave the big headlines, that’s one thing. Frankly, irresponsible. If you want victory for Ukraine, then that is another thing, and you should feel your responsibility for every word you say about our state’s preparation for defense or counteroffensive,”

Ukrainian officials have started to reveal ‘classified information’ on social media in exchange for a few likes or retweets. There are numerous instances where statements made by Ukrainian officials in the past have brought Zelensky into deep trouble.

For instance, if one remembers correctly, the deputy military minister of Ukraine, Vladimir Karpenko, had recently asserted that Ukraine has lost up to 50% of its military equipments during hostilities. He had even stressed that the Armed Forces of Ukraine require 700 artillery systems to compensate for their earlier battle losses, but they have got only 100 such systems from the West so far.

Such remarks garner heavy social media attention. Furthermore, these statements could easily lead to tensions between the West and Ukraine which could give leverage to Moscow. But if they continue to make notorious statements for momentary media attention, Zelensky’s potential conduct must alarm Ukrainian officials.

It’s no secret that Ukrainian President Zelensky is running a fascist state. There are countless examples that show that Zelensky has passed the buck whenever he faced trouble. Those who go against Zelensky and tell the truth are either executed, as at the Olenivka prison facility, or escape for their lives, as Oksana Pokalchuk, the former head of Amnesty International Ukraine, did.

Read More: Amnesty Ukraine officials are scared for their lives after they exposed Zelensky’s war crimes

Zelensky has issued a blood-curdling warning to his officials on purpose. The fate of these warned Ukrainian officials would be the same as Olenivka or dead Azov fighters if they continue making such statements in spite of his warning.

But we have a question for Zelenskyy. A troop learns from its commander, an official from his leader. When Zelenskyy was giving interviews to global media, greeting suited men at Davos and getting himself clicked for the cover of Vogue magazine along with his wife, the same officials were engaged in trivial things like running a country and fighting a war. Now the poor souls want some fame too. What’s wrong with that? And isn’t it hypocritical of the joker turned president to hog all limelight and disallow his colleagues from getting famous