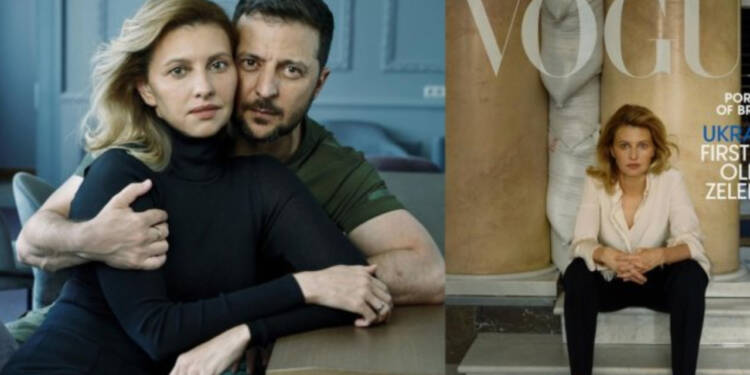 He’s actually a mere attention seeker and continues to enjoy it merrily. But, his latest photoshoot has made everyone realize that his legacy is actually a farce…

As the Russia-Ukraine war started, the world started portraying Volodymyr Zelensky, a comedian who turned into President as a warrior. He became the blue-eyed boy for the liberal netizens on social media because he was standing strong and making straight eye contact with the Russian forces.

Zelensky was called in so many global events like Davos, the Cannes film festival, and Parliamentary address. He was probably enjoying the best times of his life, until his recent mistake.

Recently, Zelensky committed a mistake, a mistake that has started to make him look evil on social media. Now not only his critics, but even Pro-Ukrainians have started to raise questions about the same.

The Internet is full of images where Ukraine is devastated and totally destroyed by Russian strikes. But now, totally different kinds of photographs have emerged from Kyiv.

The Ukrainian President Volodymyr Zelensky has posed alongside his wife Olena Zelenska for the Vogue Magazine. For those who don’t know, Vogue is a Fashion and lifestyle magazine. This photo shoot has nothing to do with Ukraine or even Ukrainians in general.

Vogue published a total of five photographs along with an article. To give the impression that Zelenska is a strong woman who supported her husband through terrible times, all images were set and well-lit.

Volodymyr and his wife were seen posing in front of the camera holding hands and hugging each other. His wife, took a leap ahead and posed inside a bunker and another with four soldiers to show the ‘strength’ of women.

As expected, the woke liberals hailed the photoshoot and started quoting ‘more power to Ukraine’, but there were many who raised questions about the Ukrainian leader’s approach to the gut-wrenching war.

People started asserting that Zelensky is not at all bothered by the war, and all he wanted was media attention. The photoshoot became a laughable matter for the world. This shift of narrative was well caught by politicians and eminent personalities across the world.

Renowned personalities like Republican leader from California David Giglio and Writer and producer David Angelo left no stone unturned to chastise the Ukrainian President and the first lady.

Zelensky is such a fraud I swear to god what are we doing here I'm not risking WWIII for a Vogue shoot pic.twitter.com/G1TcT0pYkG

I’m confused. The Ukrainian people are stuck fighting a war that they cannot possibly win, and instead of working towards a life-saving solution Zelensky has time for photo shoots with Vogue.

This is the “world class” leader the media was telling us about?? pic.twitter.com/kKne00qQWf

In the last six months, Volodymyr Zelensky emerged as a new global leader who had the guts to defeat Russia. The liberal media cabal attempted to present Zelensky as a democratic hero, and a protector of liberal values.

Volodymyr Zelensky started to get engaged with European Union and NATO in a bid to acquire weapons and aid. However, as the conflict progressed, the reality began to surface, and it became evident to the world that Ukraine was being defeated by Russia.

But then Zelensky started to pass the blame on his aides for his mistakes and his actual face as a dictator of one of the most corrupt nations in the world started to show up.

Now, this Vogue Photoshoot has enough strength to reveal Zelensky’s actual face to the world. Mr. President has enough time for a high resolution photoshoot, but he doesn’t have time for resolving the food crisis and establishing peace. Zelensky has himself burnt his legacy to the ground.