George Orwell’s Animal Farm consistently ranks at the top of the list of his greatest hits. We don’t want to spoil the story for you but its resemblance with what went on in Canada almost a year ago is uncanny and a re-telling is unavoidable. 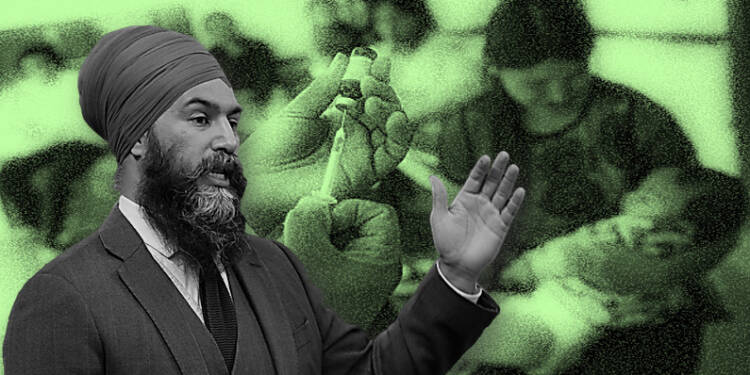 In Orwell’s magnum opus, Manor Farm is run by a farmer who owns several animals. The animals eventually rebel and overthrow the farmer. They rename the farm and finally settle down on “Animal Farm”. By the end of the Novel, Animals begin acting like humans and only one commandment remains: ALL ANIMALS ARE EQUAL BUT SOME ARE MORE EQUAL THAN OTHERS.

Arbitrary changes made to the original seven commandments were a running theme throughout the book. Arbitrary, Selfish, Erratic, and irrational changes to be exact.

That is exactly what happened on October 2021 when the so-called National Democratic Party of Jagmeet Singh decided to heartlessly announce, in essence, that “British Columbia Public Service employees who do not receive two doses of vaccination against COVID-19, or refuse to disclose their vaccination status, and do not have an approved exemption request, are to be placed on a leave without pay for a period of at least three months, after which their employment may be terminated”.

And the ones on the receiving end of these arbitrary changes were PREGNANT MOTHERS who were expecting 80% salary during their maternity leave and a benefit of $20000 on top of it. Listen in to what some of these to-be mothers said…

“I believed I was providing security for my family, I had a permanent position to return to.”

“We have a newborn and are trying to pay our mortgage and other bills.”

“We have a mortgage and two children. With the crazy economy and inflation, to have the little savings you have ripped out of your hand just seems crazy.”

“I haven’t been the same mother to my kids. More stress, more anxiety. It seems like this should have been one of the happiest times of my life, being at home with my child.”

If a mother on maternity leave is unvaccinated, they are in a position to miss their return to work date and be liable to have to pay back the entirety of the top-up benefit, from $20,000 all the way up to $50,000 in some cases. Or, they can prove vaccination and return to work without a problem.

In hindsight, the NDP hoodwinked pregnant mothers. The offer of maternity leave with 80% salary and an additional $20,000 was valid in October 2021. The vulnerable mothers availed the benefit only to realize in November that they had been cornered by the NDP which coerced them into vaccination via the double threat of unemployment and a hefty fine. What’s in it for the NDP? Why would they want people to get vaccinated? Our answer. They are sycophants who want to be in the good books of Big Pharma.

Many things changed after the BC government’s scheme in October 2021. The efficiency boasted by big pharma vaccines came out as fallacious. There happened a revolt among the masses to not take the vaccine. Even CDC made it clear that vaccination need not be necessary. But with cruel disregard, NDP in British Columbia is set on a mission and is busy doing legworks through heinous means to get people vaccinated, and that too pressing it on the vulnerable sections of the society.

Forcing to-be mothers to get vaccinated while waving the threat of unemployment and a hefty fine is a new low for Canada. Why force people into vaccination when its safety and efficacy are under question? Truth be told only the NDP knows what it was playing at. What we know is that their methods are cruel, irrational, ineffective and reek of the ugliest form of militant Liberalism.