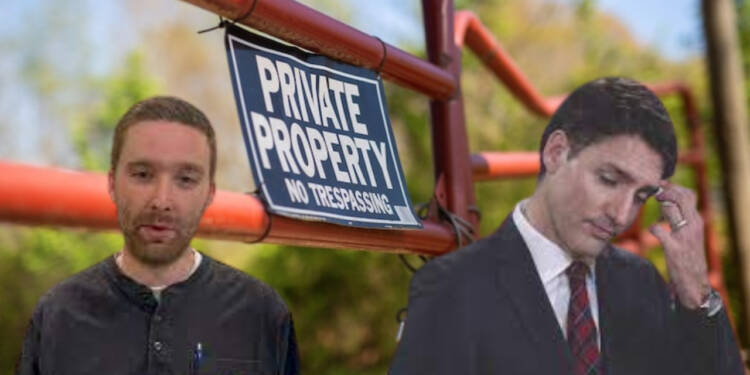 In a ‘kakistocracy’ everything makes sense. Right? Still, the citizens must be entitled to question the government. But, if you’re ‘somehow surviving’ in Trudeau’s Canada then things obviously have to fall out of the box.

After all, what do you expect out of a country whose ‘Crime Minister’ himself never gets tired of breaking the laws and making controversies? Perhaps, he likes to stay in news effortlessly.

Many of you might not be surprised to know that Mr Trudeau has again breached a law. Saskatchewan’s Trespass to Property Act. Yes, you got that right. So, from trespassing into citizens’ basic rights to their private properties, the ‘Crime Minister’ has traversed a long way indeed.

You see, Justin Trudeau’s agents have been caught trespassing on farmlands in conservative-ruled Saskatchewan to test nitrogen levels. Saskatchewan’s minister Jeremy Cockrill claims that the Trudeau administration has been illegally deploying federal officials onto farmlands in the province to conduct nitrogen testing without the owners’ permission.

The farmers who reported the intrusions made it clear that these government officials had not asked for permission to enter the property and had not received any other kind of authorization.

Additionally, Minister Cockrill cautioned the Trudeau administration that these acts violate the Saskatchewan Trespass to Property Act and might result in harsh penalties, such as fines of up to $200,000 and jail terms of up to six months.

The purpose of these federal agents, as they say, was to test the water in the farmers’ dugouts to measure nitrate levels. Now, this move is being seen as connected to the Trudeau government’s recently announced policy to reduce the use of fertilizer on Canadian farms by 30%.

We know how the Canadian government has been tricking the people of their country for a long time now on the pretext of the 2030 Green goals.

Two years ago, the Liberal government introduced an emissions reduction target for fertiliser use in the agricultural industry. Trudeau is now pushing for reforms and plans to reduce nitrous oxide emissions, a byproduct of nitrogen-based fertilizers.

Certainly, Liberals in Canada seem to have gone bonkers. The Trudeau government, under the pretext of climate policy, is reportedly going to force farmers to use less fertiliser at a time when inflation is rising and food poverty is growing.

But, if you live in Canada you have no right to go against the government and question its regressive policies.

Prairies will push back

It’s bizarre how Trudeau never gets tired of ruining the lives of his own countrymen. He should have learnt a lesson from the recent dutch farm protests. The protests in the Netherlands got messy with farmers dumping manure on highways and setting hay on fire prompting traffic jams in central and eastern parts of the Country. All of these were done in protest over government plans to reduce fertiliser use and livestock numbers.

The disruptions were the latest in a series of protests that have shaken up the Netherlands and Mr Trudeau is all set to make the same blunder. He wants to play with the lives of the poor farmers of his country but Saskatchewan won’t let that happen.

Being one of the three Prairie provinces in Canada, the region is the breadbasket of Canada. So definitely, if the farmers of the province are not happy, there is no way Trudeau’s bizarre and irrational schemes would come into play.