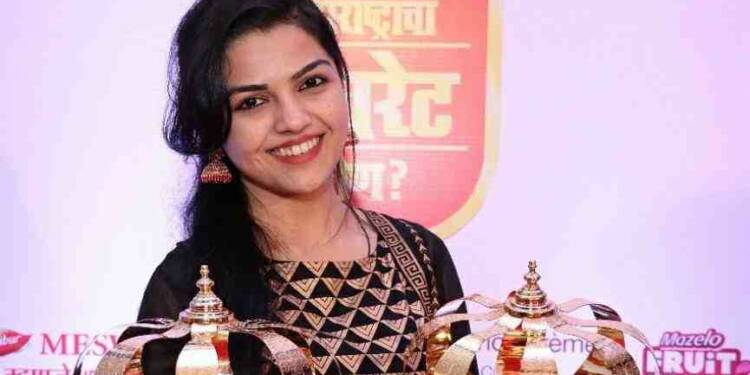 Actor and playback singer Aarya Ambekar hails from Pune, Maharashtra. She is very popular on social media sites and has over a million followers on Instagram. She came to the limelight at a young age because of her appearance in the first season of Sa Re Ga Ma Pa Marathi L’il Champs in 2008. In this article we are going to talk about the biography, career, notable works, films and family of Actress Aarya Ambekar so read the article till the end.

She was one of the finalists in the competition which attracted her a lot of recognition from the Marathi audience. She has sung numerous songs for various albums and around various directors in Maharashtra.

When Aarya was two years old, her grandmother, a classical vocalist, saw potential in her. At the age of five and a half, Aarya began receiving regular musical instruction from her mother and teacher, Shruti Ambekar.

Aarya performed her first piece of music when she was six years old and in the first standard.

She is pretty active and popular on social media sites. She has over a million followers on Instagram and can be reached at her official Instagram handle ambekaraarya. She has posted numerous solo and group photos on her account.

She is said to have a relationship with the child prodigy classical singer Rahul Deshpande. However, neither Aarya nor Rahul has confirmed their relationship status. So, we can call it a rumor and we should wait for their confirmation before concluding.

Her parent are Samir Ambekar and Shruti Ambekar. Samir works as a doctor, whereas Shruti Ambekar is a Jaipur Gharana classical performer.

Aarya has a BA in arts with a concentration in economics. She has an MA in music from a reputable university. She received a gold medal and took first place in the university for her MA examination. She has successfully finished a Sound Engineering certificate program.

Aarya Ambekar has been taking music lessons since the third grade.

Aarya’s mother, who she considers to be her best instructor, has guided her toward classical music.

Inferring from her distinction in Higher Secondary Education from Fergusson College Pune, Maharashtra, Aarya Ambekar is a capable student (2012).

Aarya received the “Manik Varma Scholarship” in 2008 as the youngest recipient.

We hope this biography article of Actress Aarya Ambekar will be helpful for you to understand her journey and works.