A Christian Evangelical revival movement is heating up, which is enough to make the prime minister of Canada super anxious. 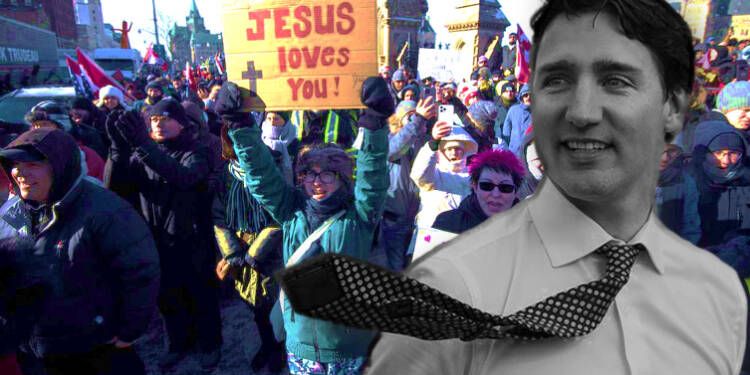 The anti-Trudeau freedom movement kicked off by Truckers is now gaining traction among Christian groups and nationalist leaders. In a major shock for Justin Trudeau, these groups are promoting Christian values and combining Christian identity with Canadian nationalism and right-wing political beliefs.

More and more religious leaders have joined the freedom convoy, who suggest voting for Trudeau and liberals goes against Canada’s Christian values. In Ottawa, the group behind taking over an abandoned church was a Christian religious organization. The group called ‘The United People of Canada’ or TUPOC cited religious conviction as motivation for reviving the church. The group director Diane Nolan is urging people not to vote for orange and red parties, and instead vote for blue.

She said in a Facebook message that “I’ve had so many dreams and visions. In the next election, if anybody is voting red or orange, we’re in trouble. If they come into power, I’m telling you…that red and orange, we need to be very careful. If we see them get in power then you better get back into position and you better know how to stand.”

TUPOC’s message is that ‘freedom’ is the essence of Christian values and by cracking down on such values, Trudeau is ruining the temple of democracy. In Saskatchewan, religious leaders are increasingly embracing convoy members. Various convoy members proudly spoke at the three-day ‘Faith Fire Freedom Festival’ in Moose Jaw organized by the Christian nationalist group Revival Reformation Alliance.

Nadine Ness, president of the organization Unified Grassroots, declared, “We’re ready to see a big move across Saskatchewan and I think it’s gonna start here, this awakening, this revival of some sort.”

A key convoy organizer, named Pat King, also said that standing against Trudeau was a godsent opportunity that every Christian on Canadian soil must not squander. He said, “God has given us the opportunity to be able to take part in something like this, to stand for what we stand for – peacefully, not aggressively – and we’re making a huge impact.”

Trudeau being Trudeau, might dismiss this revolution among Canadian Christians as an ‘anti-national movement’ or might declare religious leaders ‘fringe elements.’ Trudeau-loving liberal media has already started dubbing such groups as ‘far-right’ gatherings and people associated with them as ‘radical extremists.’

We might soon see Trudeau using emergency measures and draconian laws to dismantle the revolution, in a desperate bid to save his chair. For Trudeau, who shamelessly refers to the Easter holidays as a “long weekend,” with no regard to the associated religious sentiments, tormenting the disgruntled Christian leaders is not really a big deal.

In July this year, the anti-Christian prime minister was blasted by a federal Judge for denying an Ontario university access to the Canada Summer Jobs Program for little reason other than the fact that it was a Christian institution.

Blinded by his affection for Islamists and Khalistani terrorists, Trudeau is resorting to treating the Christians of Canada as secondary citizens. But this is going to change soon. Christians in Canada have vowed to throw Trudeau out of power, and bring the conservatives in Ottawa to save the religious and democratic values from Trudeau’s assault.