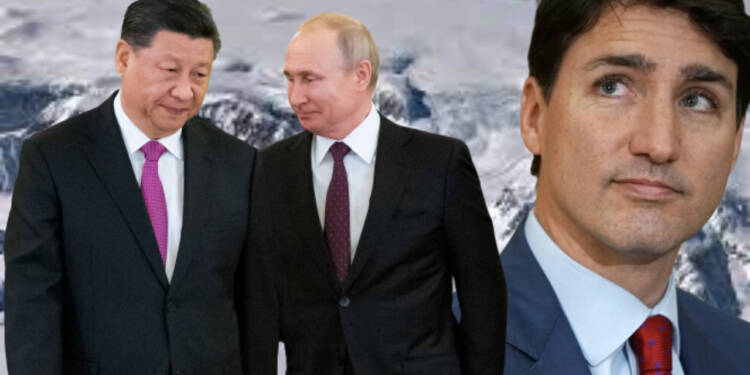 The NATO Secretary General recently got an arduous task on his plate—to smack some sense into the Ostrich Prime Minister of Canada, Justin Trudeau.

Ostrich, because the Canadian leader always seems to live in a parallel world when it comes to securing Canadian interests and prefers to scurry away from challenges rather than confront them head-on, just like an ostrich.

On Friday, the NATO chief visited Canada’s Arctic region and ended his trip with a bone-chilling warning for Ottawa. General Jens Stoltenberg declared that Russia and China were coming for Canada.

The general said that China and Russia were cooperating in an unprecedented manner to mount military pressure on Canada. The NATO chief said, “Russia has set up a new Arctic command. It has opened hundreds of new and former Soviet-era Arctic military sites, including airfields and deep-water ports. Russia is also using the region as a test bed for many of its new novel weapon systems.”

Stoltenberg further threw light on China’s sinister plans for the region. He said, “China is also expanding its reach and has declared itself a near-Arctic state, with plans to build the world’s largest icebreaker. It is investing billions of dollars in energy infrastructure and research projects in the high North.”

The NATO chief thought his words of caution might clear the air in Ottawa, but he soon realized he was expecting too much! Despite looming threats and an urgent need to send Russia a strong message, Trudeau stopped short of committing to organising a joint NATO drill in the Arctic.

Read More: Balkanization of Canada is a real possibility under Trudeau

Defence Minister Anita Anand said the Liberal government of Ottawa has no plans to host a NATO drill similar to the alliance’s annual Exercise Cold Response in Norway. Yves Brodeur, a former Canadian ambassador to NATO, hinted that not organising a NATO drill in Canada’s Arctic might lead to Russia getting more and more assertive and bellicose. But the caution fell on Trudeau’s deaf ears.

Canada not only lacks the military strength to brave Russia in the icy region, but it also suffers diplomatic isolation from its own allies, bar the US. You’d be surprised to note that nations like the US, the UK, Belgium, France, Japan, Singapore, Russia, and European Commission don’t acknowledge, and in fact dispute, Canada’s claims over the Arctic. Canada claims that the Northwest Passage is an internal Canadian waterway. But the only problem is that no one outside Canada takes such statements seriously.

And then, Canada’s military remains the country’s biggest Achilles’ heel. It’s ill-equipped and lacks warfare experience. The programs and schemes concerning the advancement and modernisation of the Canadian military are running decades late. For instance, the purchase of armed drones still remains a thorny issue. Trudeau loves to call armed drones ‘controversial weapons’, which 76 foreign militaries are already using and 50 others are developing.

Globe and Mail estimate the deal for the drones could be reached in the next one year or two, and Canada might finally get its hands on the drones in 2025. The report says, “Aside from purchasing a small number of temporary, unarmed drones for the war in Afghanistan – all of which have since been retired – the military has never been able to make much progress on a permanent fleet.”

You see, what Trudeau needs to do is reinforce Canada’s control over the Arctic by investing more in civilian as well as military infrastructure. It needs to build ice-breakers to raze down Russia’s and China’s hefty Arctic ambitions. But what he also needs is a spine to execute all such policy changes and unveil the country’s new military doctrine; that he and his lackeys in power don’t possess.