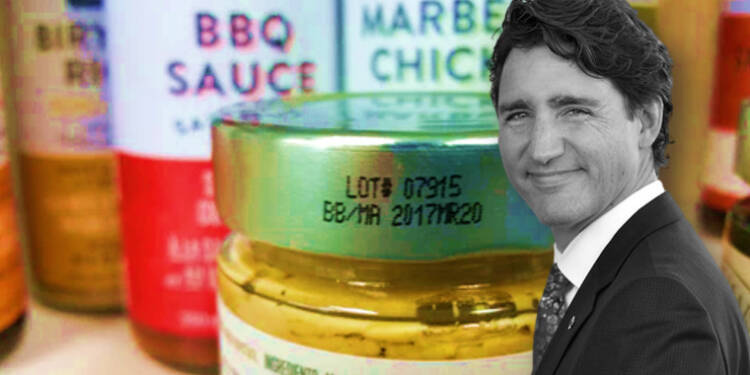 Who would want to eat expired food? Certainly, nobody. But, if you live in Trudeau’s Canada, you have no choice. You aren’t even entitled to the mere volition of choosing fresh stuff for your kitchen. Imagine your family consuming stale and smelly food products. Canada has turned into a hell hole of a country to survive.

We know, a ‘terrible tragedy’ is unfolding in the North American country. The tragedy of nearly 5.8 million people living in food insecurity. Well, we are not saying this. This is what the chief of Maple Leaf Foods, Michael McCain says.

So, the smart cookie Trudeau has a plan. ‘Eliminate best before dates’ on food packaging. Well, such brainless things happening are all you can expect from Canada. Although, the majority of Canadians are against the plan.

But who cares? At least the Prime Minister doesn’t. So, the land of the maple leaf is all set to eliminate the mention of expiry dates from the food packaging. Only until the taste, smell, or texture of the expired food stops you from consuming it, you will never know you are having something rancid.

The move to eliminate the best before dates is a push to reduce food waste, according to a joint report from the Agri-Food Analytics Lab at Dalhousie University and the Angus Reid Institute, released Thursday.

Thirty per cent of Canadians say that they oppose doing so, and even more — 32 per cent — say they strongly oppose it. Though 27 per cent said they would strongly support or support eliminating those date labels.

“You can use milk a few days after the best before date; it’s not tragic,” Cindy Hutchinson told CBC News as she was leaving a farmer’s market in Winnipeg.

For another market-goer, named Shirley, it was a decisive no: “I like fresh stuff,” she said.

According to the survey, consumers are influenced by date labelling because 25% of people use “best before” dates as a gauge of product safety.

Make no mistake, the Canadian government might be trying to fool you with ‘cutting down on food wastage’, but the reality is quite different. You see, there is already a food crisis in Canada owing to which a million Canadians are food-ridden.

Due to financial restrictions, they do not have appropriate access to food, and over the past 15 years, their number has constantly climbed. With the introduction of government pandemic benefits, this number decreased marginally at the beginning of the COVID-19 outbreak but is now once again rising, according to Statistics Canada.

Approximately 16% of Canadians are living in food insecure households, according to Valerie Tarasuk, a professor of nutritional sciences and the head of a research team at the University of Toronto looking at food security.

Prof. Tarasuk from the University of Toronto agreed with Mr. McCain that the issue’s underlying cause is a lack of revenue. She claimed that groups like the Maple Leaf Center contribute to raising awareness of the issue.

She claimed that in the future, people with already limited incomes will probably have to further reduce the quality of their food due to record-high food inflation rates. She underlined, however, that income, not inflation, is still the main factor contributing to food insecurity.

Be it whatever, the quality of food is certain to be reduced. Now, Canada wants consumers to stay devoid of any source of information. The plan is sure to witness flak from the citizens and remain unsuccessful eventually.

While Trudeau’s geniuses do not find consuming an expired product as tragic, the consumers do. It’s high time, that Canada keeps on bothering its citizens with its mindless plans.

Russia turns Kazakhstan into a giant defence manufacturing unit for itself