The Canadian government has largely endorsed Entomophagy. The federal government is contributing up to $8.5 million to the construction of a commercial plant in London, Ontario to produce cricket protein. 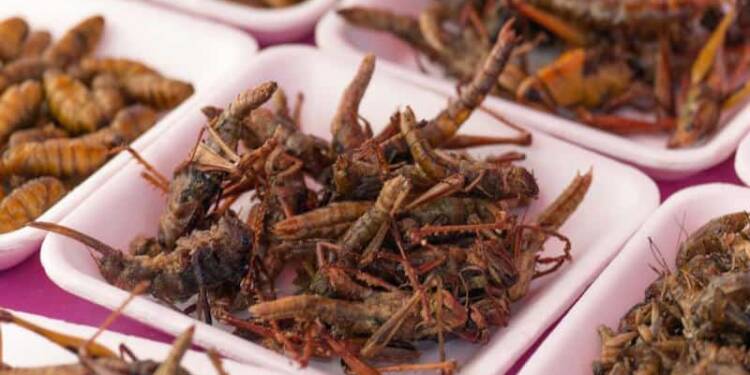 Local food is a unique part of any community’s culture.

In Canada, food habits have been fairly similar to those of the US. But from dinner tables to farmlands, Canadians are seeing a slow but significant change in their eating habits.

Their food now includes insect-based powders and snacks, edible insects like crickets and mealworms, and dishes like crispy beetles and red ant pudding.

They will make you ditch your own food for bugs

In general, every region of the world has a cuisine and a food culture that are as diverse as the languages they speak. In fact, food has always had a strong influence on one’s identity. Children learn to eat and appreciate the cuisine of their community, just as they learn and adopt their mother tongue.

However, the unique food culture of Canada is gradually vanishing. Your leaders are on a mission to get you to ditch your steak and eat the critters.

Entomophagy, the practice of eating insects is practised widely in far east countries like Thailand, China, Indonesia and Philippines and African countries. Bugs are crawling onto menus all across these countries where it is a kind of staple food.

However, when it comes to the North American country of Canada, they have a proper cuisine. Eating insects and bugs is alien to Canadians.

For more than five years now, several food giants are trying to push insects down your throat.

However, as we might imagine, a lot of people in developed countries are debating the necessity of a dietary component that is typically associated with underdeveloped countries and impoverished areas where meat is expensive and difficult to purchase.

Unsurprisingly, many individuals are voicing their dissatisfaction with the new bug food narrative. There seems to be a lot of evidence of consumer pushback.

People are widely sharing on social media about how they discovered creatures like crickets listed in a product’s ingredients.

My local corner store. Langley British Columbia. I had a chuckle, not gonna lie i almost asked them if they believed in the new world order 😂 but I’ve been going there 20 years, i know it’s just another silly item, but still… makes me think 🤔 how soon will this just be common? pic.twitter.com/lEdp4d0Vj1

‘Actually Foods’ is a Canadian start-up whose cricket farm is in Peterborough, Ontario, and whose snack manufacturing factory is in Saskatchewan. It is one of the new insect food companies mentioned on social media.

The company is a subsidiary of Entomo Farms, which is an affiliate of the North American Coalition for Insect Agriculture and has been farming insects for eight years.

But how do you convince people who have never even seen or tasted a red ant to buy something like red ant pudding?

Advertisers often position their products as the “luxury” choice, supported by the influence of millions of dollars in advertising funds.

Read More: India has given Canada a vital intelligence input. Inaction will have dire consequences

To add on, the pandemic has already squeezed people’s pockets. Companies have laid off employees en masse. The war in Ukraine has further added to the agonies of people when the inflation has reached sky-high levels.

Colton, who started ‘Actually Foods’ talks about the rising popularity of such foods. “Over the last eight years, I would say that when we started, 25% of the people who were exposed had heard of it, and 10% would try it. Now when we do shows, I would say at least 75% of people attending have heard of it, and 75% are willing to try it.”

These numbers have significantly risen among youngsters.

Also, the Canadian government has largely endorsed Entomophagy. The federal government is contributing up to $8.5 million to the construction of a commercial plant in London, Ontario to produce cricket protein.

So, from chicken and beef protein, to cricket protein, everything would be served to your dining tables.

Remember, the loss of this cultural aspect of food, including how to cultivate it, prepare it, and store it, directly contributes to the extinction of biodiversity.

The corn sector in the US is a prime example. There was a period when the United States produced hundreds of different kinds of maize. Today, it’s claimed that 90% of all US fruit and vegetable varieties have been wiped off, and you’d be lucky to find any of the dozen varieties of maize that are still widely produced in the US.

Due to climate change, plant diseases, and tougher pests that target few crop varieties currently farmed for commercial purposes worldwide, this biodiversity loss puts all of us at risk of food shortages.

Another startling fact is that the UN itself endorsed insect-based food in 2013. An international food crisis will be fabricated as part of the UN and the World Economic Forum’s ” Insects on a Global Food Agenda,” which aims to seize control of the world’s food supply by presenting insect food as a pre-designed solution.

This is how it starts.

“Fun” snacks to try something weird and different would gradually be introduced to your daily food routine. Beware!