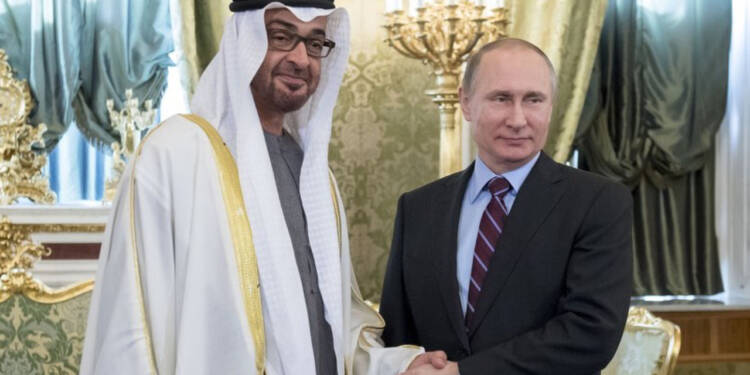 EU has sanctioned Russian oil after the Ukraine war. US has sanctioned Venezuelan and Iranian oil due to their alleged support to terrorism and anti-US powers. But nothing has stopped the sanctioned oil from making its way to European ports. Apparently, UAE is cancelling all Western sanctions on Russia, Iran and Venezuela.

Business Insider recently reported that fuel oil shipments originating from Iran, Russia and Venezuela are being disguised at a trading hub in the UAE; the Fujairah trading hub, to be specific. Interestingly, the oil that is being offered at Fujairah to purchasers matches Russian characteristics, such as sulphur content. However, the shipments are being labelled differently and UAE is making sure not to reveal the original source of the oil. Simply put, nations that desperately want to purchase Russian, Iranian and Venezuelan oil but don’t want to attract USA’s retaliation, can simply approach UAE and buy oil without worry.

All in all, UAE is acting as a giant laundry machine for ‘dirty’ and sanctioned Russian, Iranian and Venezuelan oil. For example, the amount of Russian oil involved in “dark” ship-to-ship transfers has risen sharply in recent months. Russian oil tankers have also disappeared from tracking systems near Portugal’s Azores islands by turning off their location data. Highly likely, UAE is taking in the sanctioned oil. It is believed that oil from UAE is being shipped to Europe and nations like China, India and Turkey. UAE, in the past, has also welcomed Russian oligarchs without having second thoughts and supported Russia’s actions in Ukraine by helping it evade western sanctions.

Read More: In the Russia-US Cold war 2.0, UAE has chosen a side

Why is UAE locking horns with the Biden administration?

Of all, why is UAE so keen on punishing US and the Biden administration? UAE has historically been a US ally and long relied on US security umbrella against security threats from Iran. The Trump administration spared no efforts in solidifying its economic and strategic relations with UAE, in order to ostracize Iran and appease Israel. The Abraham Accords became reality during his tenure.

But see, what Biden has done to this relationship. Firstly, he halted defence sales to UAE, and then, placed the country on the FATF grey list. Understandably, UAE perceived it as an attack on its economy as it is highly dependent on tourism. The featuring of UAE on the grey list is said to have significantly affected UAE’s tourism industry and made it difficult for it to obtain cheaper credits. Abu Dhabi’s inclusion in the list completely irked it to transform its foreign policy away from Washington’s influence.

For UAE, it’s the payback time now. On one hand, the country is fostering closer defence relations with France. On the other, it’s uniting all anti-US forces on the global stage. Venezuela, Iran and Russia, all of them are staunch US enemies. By helping these nations sell their oil abroad, UAE has launched an economic war against US.

UAE is also in the works of normalizing its diplomatic relationship with Iran. The United Arab Emirates (UAE) is set to send its ambassador, Saif Mohammed Al Zaabi, to Tehran to restore diplomatic ties with Iran after a huge gap of 6.5 years. UAE is a close Russian ally, and thus, through UAE, Russia will easily get to wrest control of global energy supplies. This will only result in further strangulating Europe and US.