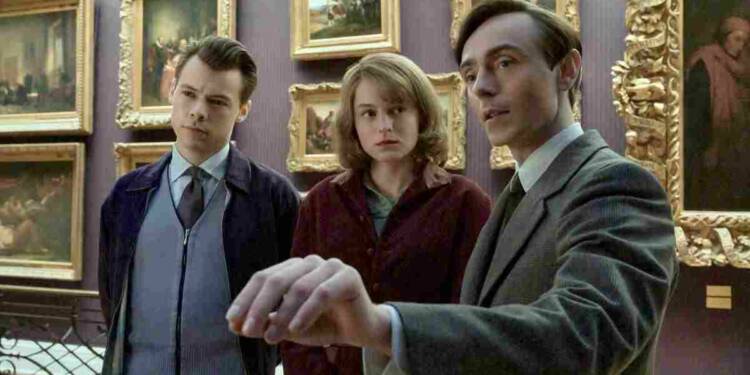 Actor Emma Corrin is an English Actress known for her work in popular web series. They played Diana, Princess of Wales in the fourth season of the Netflix historical drama series The Crown in 2020, for which they were nominated for a Primetime Emmy Award for Outstanding Lead Actress in a Drama Series and received the Golden Globe Award for Best Actress – Television Series Drama. In this article we are going to talk about the biography, career, notable works, films and family of Actress Emma Corrin so read the article till the end.

On their Instagram bio, Corrin identifies as They/Them therefore ‘They’ pronoun is used here.

According to estimates, Claire Foy made about $40,000 per episode of the show in season 1, and a novice like Emma who joins the cast in the fourth season of the show could receive a check for about the same amount.

She acquired a lot of fame early in her career and her Instagram has over 700k followers. Corrin identifies as They/Them which she says on her Instagram.

Corrin attended the all-girl, catholic Woldingham School in Surrey, where they discovered their passion for acting and dance. They spent a gap year, working as teachers in Knysna, South Africa, and doing a Shakespeare course at the London Academy of Music and Dramatic Art.

They majored in drama at the University of Bristol, but from 2015 to 2018, they transferred to St. John’s College in Cambridge to study education, English, drama, and the arts.

They were the first nonbinary cover star for Vogue in 2022.

In Royal Tunbridge Wells, Kent, on December 13, 1995, Emma-Louise Corrin was born. Their mother, Juliette Corrin, is a speech therapist from South Africa, and their father, Chris Corrin, is a businessman. Richard and Jonty, their younger brothers, are present. Their home is in Seal, Kent, which is close to Sevenoaks.

Corrin came out as queer in July 2021, and they updated their Instagram account to use “they/them” pronouns in July 2022. They later talked about being nonbinary in a New York Times interview.

How did Emma Corrin get the role in the Netflix series?

Emma accepted a position as an audition reader for Netflix’s The Crown after graduating from Cambridge University, where she spent years juggling studies and acting. She took advantage of the chance to informally apply for the role of Princess Diana, which she ultimately landed and for which she has since been nominated for a 2021 Emmy Award and awarded a Golden Globe.

What is the relation between Emma Corrin and Harry Styles?

Harry Styles and Emma were pals earlier in 2020. You have the impression that Emma and Harry have worn similar styles in the past because the two work with the same stylist. Despite the romantic rumors that have been circulating, it appears that the two are merely friends. Additionally, they have been cast as co-stars in the upcoming film My Policeman.

Which films and television programs have Emma Corrin appeared in?

Emma Corrin played Esther Carter in one episode of Granchester before assuming the role of Diana in The Crown. In the Pennyworth series on Epix, Emma also portrayed Esme Winikus. They starred in Misbehavior in 2020 as Jillian Jessup opposite Keira Knightley and Gugu Mbatha-Raw.

We hope this biography article of Actress Emma Corrin will be helpful for you to understand her journey and works.