Farmers implore Trudeau to bend his knee to Putin 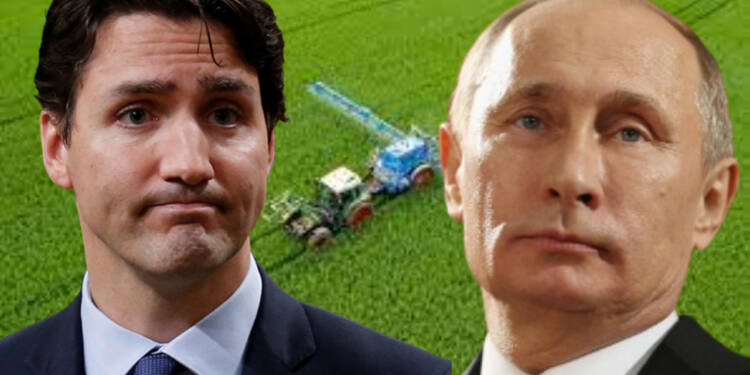 What supplies sufficient nutrients to the crops? Fertilizers, of course! By providing the proper amount and balance of nutrients to the soil, they boost production and ensure healthy crop output.

Without fertilizers, the soil would be depleted; therefore, crops would be tough to grow. They cannot survive on water alone, and nor can we.

However, Justin Trudeau, the prime leader of Canada, is ignorant of these agricultural fundamentals.

Trudeau appears to make yet another misguided move, following his allies in the west, the US, and other members of the league, for which he will undoubtedly pay a price shortly

A 35 per cent tariff placed on Russian-made fertilizer has been put in place by the federal government, which has caught the ire of Canadian farmers.

Another crisis in making

Canada’s economy is already in shambles. Almost every sector of the economy is in dire need of help to revive itself. Shockwaves have been felt throughout the whole economy as a result of the Covid crisis’ terrible mishandling.

The housing problem in Canada is also a continual topic of discussion; sky-high prices combined with high rates of inflation and household debt are a prescription for disaster.

And thanks to Mr Trudeau’s policies, there is another crisis in the making—a food crisis!

This is not what we are making out of thin air. This is being vouched for by the Canadian farmers themselves.

In order to punish Russia economically for its invasion in Ukraine, Canada’s federal government lately decided to impose a 35 per cent general tariff on virtually all Russian imports—including nitrogen fertilizer.

Canadian farmers, who rely heavily on these imported fertilisers, have cautioned the federal government about this, saying that consumers and growers of cash crops will be the ones footing the bill.

This move isn’t just limited to impacting the farmers. It goes without saying that a lack of fertilizers would result in lower crop yields, which would ultimately disrupt the economy’s supply and demand chains and have an effect on all social classes.

Farmers in Ontario have particularly voiced their concerns. Ontario Bean Growers Chairman David Woods says, “It’s a $60 million tax that will trickle down to consumers at the end of the day.”

It is also worth noting here that Canada is the only G7 nation not to exempt fertilizers from its Russian sanctions. Other G7 nations, like the US, have completely exempted their producers from importing Russian fertilizers.

Moreover, this move is hardly going to have any impact on the Russian economy.  “It’s not like we’re buying Russian fertilizer after they went to war with Ukraine. This was a deal that was already done. The ink was dry. Putin had his money. It was just a matter of waiting for the boats to load,” says David Woods.

According to Woods, the 35 percent tax on fertilisers would eventually result in higher food costs because the majority of crops are currently cultivated in Ontario fields that grow beans, wheat, corn, and canola.

So, why did Trudeau make such an irrational decision, and why is he trying to choke the economy even more with his misguided actions? Well, he may soon have to answer these questions.

Nevertheless, it is not the first time Trudeau has made such a move. Recently, he presented a new climate strategy with a focus on decreasing nitrous oxide emissions from fertilizer by 30% below 2020 levels by 2030. Canada’s farmers have already expressed anger at the federal government for this measure. And now this tariff on the Russian fertilizers—something which is not acceptable to the Canadian farmers for sure.

Read more: Saskatchewan minister rips into Trudeau for playing with the lives of Farmers

Meanwhile, as Canada struggles to recover from a deteriorating food crisis, Trudeau is busy promoting such policies. The 5.8 million Canadians who are food insecure are already finding it more difficult to buy food as prices rise, and the number is only expected to increase as a result of these irresponsible actions.

And, if farmers lose patience, another protest that eventually gathers more protesters than the February Freedom Convoy march won’t be a distant event. The only option left for Trudeau if he truly wants to hold onto power is to submit to Putin and respect his farmers.