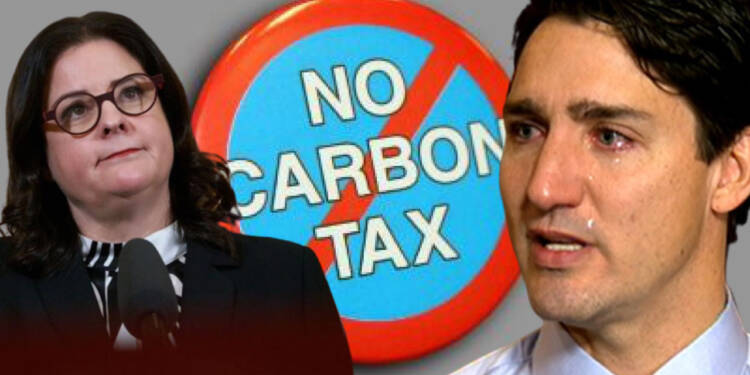 Justin Trudeau is not capable of saying an honest word. Well, this is what the Atlantic provinces have now started to believe. We know how the Eco-Warrior loses it when it comes to climate change. The fanatic Prime Minister of Canada never gets sick of making illogical conclusions. Isn’t it?

Be it the Prairies or the Atlantic provinces in Canada, all are fed up with Trudeau’s climate diktats. We already predicted that more and more provinces will rebel against Trudeau’s irrational policies. And that’s exactly what is happening.

Canada is one such nation that enjoys preaching to the world about morals, ethics, human rights, and climate change. It prefers to lecture the developing world about its obligations to nature rather than take decisive action on these pressing issues.

However, not only does the Canadian federal government try to lecture the world, but it also wants to police its own provincial governments. But it seems the provinces have had enough of your dictatorship, Mr Trudeau.

You see, how the dim-witted leader of Canada is advocating his ‘carbon policy’, which has become the new “bone of contention” between the prairies at large. Such a strategy is supposed to assist businesses and governments in navigating carbon legislation from one jurisdiction to another while lowering greenhouse gas emissions all around the world.

But, does Trudeau really think the policy will be a success? It is evident from the fact that the policy has already started to draw flak from various Canadian provinces. Now, Manitoba is up in arms and fully opposes the carbon tax brought in by the federal liberal government. Manitoba’s premier, Heather Stefanson, believes it to be a basket case and is in a long-running dispute over carbon pricing between the province and Ottawa.

You see, the government comes up with a carbon-tax when the provinces in Canada are already reeling under an economic crisis and rising inflation. And with this policy in action, the Canadians are sure to bear the brunt of Trudeau’s insanity.

“What the premier and others across the country don’t seem to be honest about with Canadians is that in places like Manitoba, where the federal price on pollution applies, average families get more money back from the price on pollution than the extra price on pollution costs them,” Trudeau said in Winnipeg, shortly before a half-hour meeting with Stefanson.

“We found a way of fighting climate change while supporting families who need that support, and that’s something that we are going to continue to do.”

Justin Trudeau’s comments come after Stefanson’s demands to curb or even temporarily suspend the carbon tax in order to check rising inflation. But, what do you expect from a “Karistocrat” after all?

Following the meeting with Justin Trudeau, Manitoba’s premier remained at odds as she believes that suspending the carbon tax will prove to be a boon in the current situation. She is of the view that suspending the tax would be more beneficial to the public than giving them rebates.

“Manitobans need that money now. So rather than taking the money away from them and going through rebates and all this, just leave the money with them,” she said.

But, nothing came to fruition.

Not to mention, almost a year ago, the four Atlantic provinces of Canada were asked to submit a strategy to curb climate change by Trudeau’s government.

You see, this federal carbon tax obviously comes with implications for these Atlantic and Prairie provinces.

One, the federal carbon tax, would result in price increases. The premiers of these provinces have also raised the same concern.

Tim Houston said, “the premiers are deeply concerned about the price increases that would result from a federal carbon tax, adding that the costs would amplify inflationary pressures in Atlantic Canada”.

Two, this matter has the potential to become the subject of a tussle between the federal and provincial governments. This could aggravate the relations between the governments.

And the carbon tax only adds to the worries of an ordinary Canadian. It certainly is a tough path to take, Mr Trudeau. The people who are going to bear the brunt of your irrational policies are never going to accept them. It seems like a long and rough road to building support for and defending it politically.

This deal is sure to come a cropper and you might fail, Mr Trudeau!

Prepare to get all booster shots or Trudeau will ‘restrict’ you