Olaf Scholz has now turned to Portugal and forced it to travel quickly to persuade Brussels to reboot the MidCat gas project. 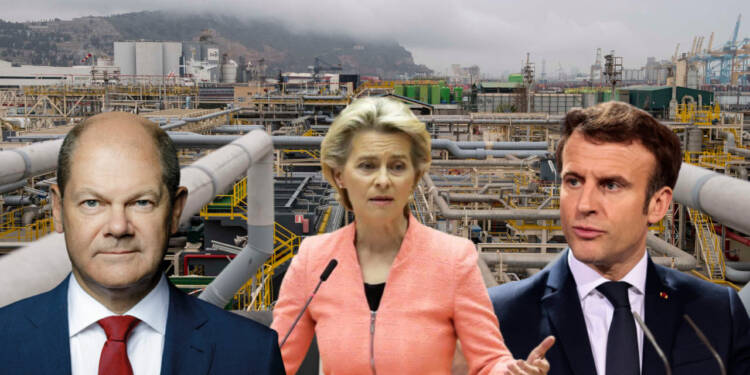 Germany has become a total nincompoop. It first imposed sanctions on Russia even though it always knew what would happen next, and now it eyes to kick off a project that may take years to conclude.

We’re talking about the MidCat Gas Pipeline. Germany wants to take a quantum leap on this project as it could fulfil all of its needs at once; however, France has made it pretty clear that Berlin’s dream will always remain a pie in the sky.

Reportedly the nation stresses that the supply of gas to the countries of Central Europe is a necessity.

Through its liquefied natural gas (LNG) facilities, Spain and Portugal have significant gas import infrastructure which might be used to supply Central Europe with new pipeline connections, such as the one named MidCat.

However, France has always intended to stay away from the project. Recently, French President Emmanuel Macron confirmed that he would not relaunch the MidCat gas interconnection project between France and Spain without proper negotiations. One day later, Portugal suppressed all hopes of negotiations and proposed a new route.

Bringing EU into the picture

Portugal has literally dumped the ball in the EU’s court. Portugal’s environment minister, Duarte Cordeiro, has called for the EU to take care of the MidCat Gas Pipeline. The minister has emphasized: “This is a European matter, not a bilateral issue between countries; a proper solution is a must,”

France was meant to fund the project, but now Cordeiro has proposed that the new pipeline would have to be financed by European funds. That’s definitely something! The EU will fund the pipeline in the region, where Germany has already a lot of influence.

This makes it unquestionable that Portugal’s push for MidCat in front of the EU was actually pulled by Germany because more than Portugal, Germany is making every effort to resurrect the project.

For years, Lisbon, Madrid, and Berlin are working hard to restore the MidCat project. Launched in 2013, the MidCat project was planned to connect Spain’s gas grid north of Barcelona to France and also aimed at pumping Algerian gas towards northern Europe.

However, France cancelled the project back in 2019 for cost and environmental reasons. Paris stresses that Berlin’s plan is stupendous.

Furthermore, the French ministry irks that it would take many years to complete just the planning and other documentation related to such a project.

Read More: Only France can save Germany now. But with conditions!

A tussle between France and Germany

Germany believes that by establishing the MidCat Gas Pipeline at the earliest, it could bail out its sinking economy and restore its economic glory days.

But, France continues to remain a major thorn in its ambitions. Recently, French President Emmanual Macron again denied helping Berlin in the revival of the MidCat Gas Pipeline project.

Reportedly, Macron pitched, “There is no obvious requirement. This project will not solve the European gas problem. It is false, it is factually false, I am willing to hear my colleagues give me other facts that would convince me otherwise,”

Following the statement, Portugal proposed a new route through Italy, too, with the support of the EU, keeping France out of context as a result.

To be honest, this strategy of Germany to push Portugal for persuading the EU was indeed a fine plan. However, as we have mentioned, Germany is a nincompoop.

Despite the fact that there is a good probability of Italy’s future government being one of the staunchest opponents of the EU, Berlin really wants to reroute the MidCat project through Italy.

What if Giorgia Meloni forbids MidCat? In such a scenario, Portugal and Spain would lose nothing. But, Germany would again be a sure-shot loser…

Trudeau emerges as the biggest brand ambassador for the conservative party