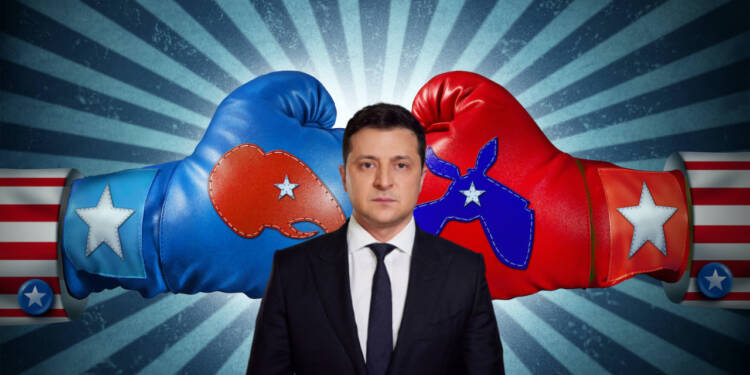 The Democrats have already started making provisions that would enable them to spend the American taxpayers’ money to fund Ukraine, in turn, prolonging the war for many years to come, even after they lose the majority in the house in the upcoming midterms in November.

Top U.S. officials on Thursday unveiled $2.8 billion in new military and humanitarian aid for Ukraine and Eastern European allies, marking a shift from just-in-time weapons transfers to Ukraine to a longer-term effort to equip nations all across NATO’s eastern front.

The declarations came as Secretary of State, Anthony Blinken, made his second trip to Kyiv since the war began. Defense Secretary, Lloyd Austin and Joint Chiefs Chair Gen. Mark Milley also met with dozens of their international counterparts at Ramstein Air Base in Germany to discuss the conflict in Ukraine.

Ongoing War: A boon for Democrats

The United States will reportedly transfer stock worth $675 million to the Ukrainian military, including more ammunition, armoured vehicles, and anti-armour weapons. The larger $2.2 billion military financing package, however, will be divided in half, with about a billion going to Kyiv and the rest being distributed among 18 of Kyiv’s regional neighbours, spanning from the Baltic to the Mediterranean.

Washington under the Democrats is trying to make provisions that would incite violence in the east for a long time to come. Biden is calling for trouble by providing military funding to the states along Russia’s western border.

The Democrat leadership knows that the Republicans, once they gain the majority in the house, would attempt to save the taxpayer money by trying to make things right with the Kremlin.

Read More:  Exclusive: Germany wants out of Ukraine war but Biden is blackmailing it with FATF

What good has your war exactly brought about for the American citizens, Mr President?

What Biden doesn’t want is peace in Europe. He ardently believes that war in the east would be good for the US. But guess what Mr President? The US economy is in recession, inflation is touching a record high and the dollar is weaker than ever. The US certainly has lost its hegemony over the global order.

“At some point, particularly if House Republicans win in the elections, I don’t know how we do this in December or in January, it’s going to be really, really difficult,” one Republican staffer admitted, to get more aid packages passed. The staffer spoke on condition of anonymity to discuss sensitive political matters.

Well, fair enough. If Republican victory would hinder Biden from sanctioning the butchering of thousands, then it is what all of us must pray for. It is the need of the hour if it would stop the 79-years old President from spending the hard-earned money of the taxpayer amid deteriorating economic conditions of the nation.

Also, there are concerns over the strength of the U.S. defence industrial base as contractors race to replenish American stockpiles of munitions being sent to Ukraine.

Washington is letting go of its equipment faster than ever. Biden had previously vowed to intervene militarily against China if it invades Taiwan.

In accordance with the current pace of military equipment deterioration, it would indeed be very difficult for Washington to keep up with its promise.

“If there were a war in the Taiwan Strait right now, [there are] very serious concerns the U.S. would have sufficient munitions for any kind of prolonged conflict,” Seth Jones, director of the International Security Program said. “The industrial base right now is being severely tested”, he added.

A Republican victory is inevitable with all the mess that Biden has made in the past couple of years. Hopefully, congress would force the White House to look out for itself before it endeavours to embark on a charitable journey that essentially sanctions the deaths of hundreds of thousands.