About 71% of U.S. LNG exports went to the European Union and Britain during the first five months of this year 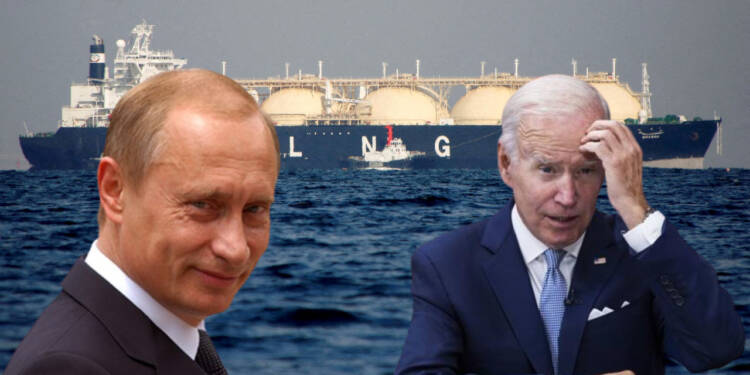 Guess who benefited from the Ukraine war the most? No, it’s not Russia, China or Europe. It’s the United States of America.

On the pretext of helping Ukraine, the Biden administration was cleverly creating an energy empire. Alas! It couldn’t escape Russian President Vladimir Putin’s eagle eyes. And now, he has taken it upon himself to dismantle it.

According to the Energy Information Administration (EIA), the United States overtook other LNG exporters in the first half of 2022 as the country increased supplies to Europe in the midst of the Ukraine conflict.

In comparison to the second half of 2021, LNG exports increased by 12% to an average of 11.2 billion cubic feet per day (bcfd) in the first half of the year. Exports were boosted by increased LNG export capacity, higher prices, and demand, notably from Europe.

About 71% of U.S. LNG exports went to the European Union and Britain during the first five months of this year. That’s how big Europe as LNG market has become for the USA.

Read More: US is buying Russian oil from India in broad daylight

So basically, USA monopoly in the European market is unmatched and it has no challengers. There are reports that Spot LNG prices might easily break the previous record high of $69.955 per mmBtu, as European utilities will likely be scrambling to get enough natural gas for the next winter peak demand season. They have no one but US to fall back on.

We have already witnessed how Europe is struggling to get out of US’ clutches. And being over-dependent on US’ LNG gas is certainly not the way forward to it. European leaders are already meeting at a conference in Prague on October 6 to create a body called the European Political Community, which will be dedicated to advancing security across the continent. A step to come out of US’ shadow after long.

Amidst this, a very significant upheaval has taken place. At the origin of Nord Stream gas pipeline in Vyborg, Russia, Gazprom has started producing liquified natural gas (LNG).

This will directly challenge the US’ monopoly of LNG exports to Europe. Since now, Russia’s major LNG exports go to Japan, South Korea and China.

Gazprom confirmed earlier this month that the Nord Stream 1 pipeline will be shut down permanently. Europe will now need to find another source of energy to make up for this energy gap as Nord Stream 2 was also banned this year by German authorities at the US’s request.

LNG is the same fuel that travels via gas pipeline but is cooled to a liquid form to facilitate transportation by trucks or ships. LNG is substantially more expensive than piped gas because of the procedure for cooling the gas down as well as the infrastructure needed for delivery. 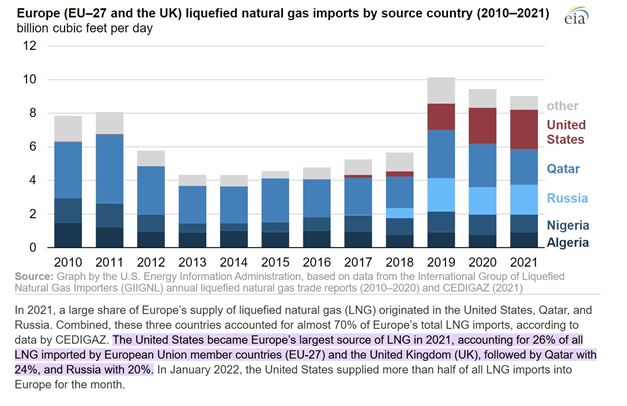 The largest customers in western Europe are Spain, the UK, the Netherlands and France. 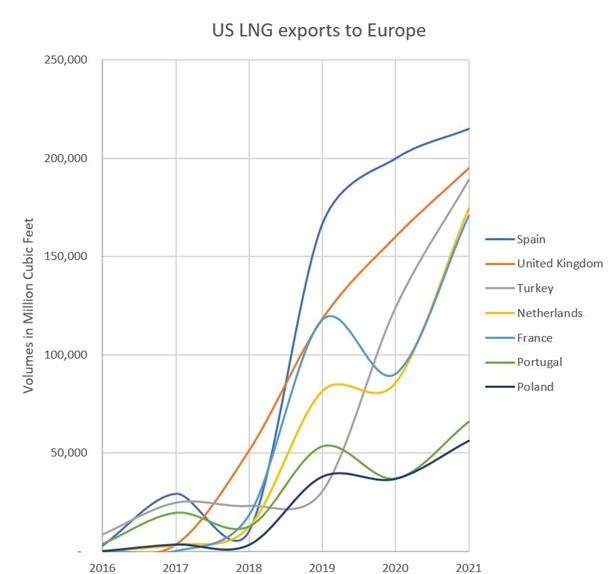 This sharp increase in US LNG imports is a part of a larger pattern of sharply rising US LNG exports in recent years, with destinations all over the world. You can see that the US LNG exports to Europe were negligible in 2015 and 2016. They have seen a dramatic rise in the last couple of years.

So why is Portovaya being an LNG terminal important if Europe already depends on LNG?

Because Russia will now load gas onto ships and export it to consumers in the European market and elsewhere, as opposed to completely abandoning the Nord Stream 1 infrastructure as the US hoped.

Additionally, US LNG will need to cross the Atlantic to reach Europe, Russia can supply all of these same nations considerably more easily from Vyborg, which is practically next door. As a result, LNG provided by Russia will probably be far less expensive than gas coming from the US.

The US will be rattled by the move. The US will view Russia’s rapid entry into the European LNG market, which it aspires to dominate, as a serious threat since the competition will drive prices down and provide Russia access to a number of new markets since it would no longer be confined by pipelines.

What will the US do to thwart the Russian LNG “threat”?

Well, it will pressurise EU governments to impose sanctions on all Russian gas. Direct rivals must be eliminated if US LNG exports are to maintain their competitiveness on a long-term basis, and to strengthen the US Dollar. However, these measures will almost surely cause widespread dissatisfaction when Europe approaches the chilly winter months and prices soar, putting a tremendous amount of burden on the EU.

It is obvious that the US’s decision to cancel Nord Stream 2 was motivated by the fact that it was unable to maintain price parity with Russian gas shipped to Europe via pipeline and is now relying on its ability to do so by ship.

At the end of the day, the EU is set to learn a very bitter lesson: in this US-dictated system of global imperialism, there is only one top dog, and playing the junior partner comes with a price: complete subjugation and annihilation.

And with this one move, Russia will not only challenge Biden’s LNG Empire but also US’ dollar hegemony and its imperialism. At the moment Portovaya’s max capacity won’t be enough to compete but it is the start of a significant shift toward a new paradigm!

Biden’s inactions have led to civil wars, DRC rises up against Biden administration